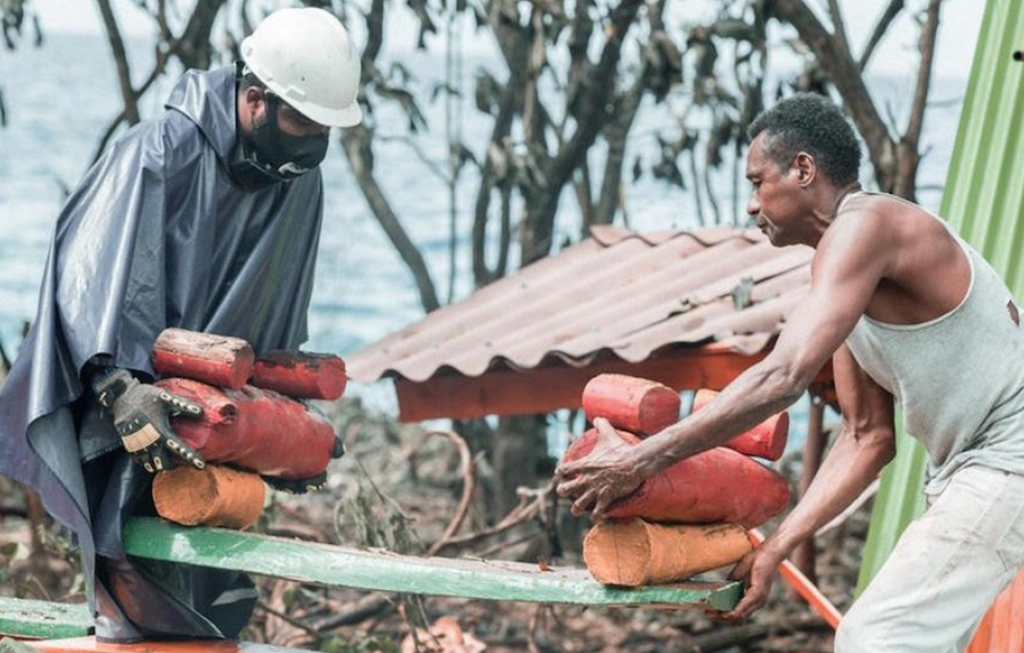 Last November, as an unusually active Atlantic hurricane season was coming to a close, two powerful storms brought death and devastation to several countries, most of them in Central America. Over the next few months, this newsletter will look at how some of the areas in the paths of Eta and Iota are faring. The first stop on this journey is a small Caribbean island called Providencia, part of Colombia’s Archipelago of San Andrés, Providencia and Santa Catalina. Winds from Hurricane Iota—the first Category 5 hurricane to hit Colombia—began to slam into the island during the night of November 15, leveling structures, ripping off roofs, and knocking down concrete electric poles. With the recovery process now underway, the Colombian government wants to build back better and put the island on track toward zero emissions.

Located northwest of the Colombian mainland, some 720 kilometers (about 450 miles) from Cartagena, Providencia is a hilly volcanic island with a geographical area of 17 square kilometers and a population of about 5,000. The island had experienced tropical storms before, but nothing like the magnitude of Iota, according to Luis Julián Zuluaga, Director of Electricity at the Ministry of Mines and Energy (Minenergía).

The much more populous island of San Andrés, the seat of the departmental government, saw some damage along the coastline, but Providencia took the brunt of the destruction Iota caused in the archipelago. “The entire island was affected by the impact of the hurricane,” Zuluaga said in a recent interview with the Energy and Climate Partnership of the Americas (ECPA).

While Iota spared most people’s lives in Providencia—two deaths were reported—the storm dealt a heavy blow to the island’s infrastructure. One of the first orders of business was to restore electric power, since that would be the “backbone” of the recovery process, according to Zuluaga, who arrived on the scene the day after the hurricane.

The island’s entire electric system had collapsed. The generating plant, consisting of four diesel generators with a total capacity of 4 megawatts (MW), lost its roof and sustained heavy damage. The network of medium-tension lines distributing electricity across the island was destroyed; many of the concrete poles had fallen over or snapped in two, and electric lines were on the ground. The low-tension lines extending to homes and businesses were also down, as were many of the structures themselves.

Electricity was needed most urgently in places providing critical services, such as a field hospital and the local airport, where government resources and international donations were starting to pour in. Even the aqueduct needed electricity to operate, and grocery stores in the commercial area had to be able to sell food.

A Navy ship set out from Cartagena with the supplies, equipment, and personnel needed to be able to restore electric power. Utility companies from the mainland, including from Cali and Medellín, pitched in. Within a matter of days, the main, 13.2-kilovolt (kV) network was back up and running.

Meanwhile, Minenergía had distributed portable diesel generators and fuel to key spots on the island. It also gave out more than 1,600 donated solar kits, which allowed people to at least charge their cell phones and have basic lighting, Zuluaga said.

As of early February, 97% of the network of low-tension lines had also been restored. Zuluaga said that about 1,200 homes now have electricity, though many others are not yet in good enough condition to have the service restored. Many people are still living in makeshift structures or tents.

“Life has not returned to normal,” Zuluaga said. Among other things, local government and police are operating out of provisional facilities, and the island is still relying on a field hospital while its heavily damaged hospital is being repaired and refurbished. A new one is slated to be built next year.

On January 1, the clock started ticking on an ambitious reconstruction effort called “Plan 100,” under which the government pledged to restore much of the island’s infrastructure and start to reactivate its tourism-dependent economy during the first 100 days of the year.

Among the construction projects underway, Colombia’s Housing Ministry plans to build more than 1,100 new homes on the island to replace those that were completely destroyed or had severe structural damage. It recently announced that it was beginning demolition work to clear out old structures and would have 290 of the planned houses under construction by April. Prototypes for the houses reportedly include such features as rooftop solar panels and a reinforced concrete area inside each house where families can shelter from storms.

Much of the reconstruction effort so far has focused simply on restoring services as quickly as possible, but the government is also looking at what changes it needs to make in the longer term to make the islands more resilient and sustainable. For example, Zuluaga said, one option might be to bury some electric lines for greater protection from hurricanes.

“I think climate change is telling us that these phenomena with these types of conditions are going to be increasingly frequent,” he said.

Iota may also accelerate plans to expand the transition to renewable energy on San Andrés and Providencia, which have relied on internal combustion engines for “close to 99%” of their energy needs, according to Zuluaga. Long before Iota hit, he said, the government had been looking at the possibility of wind and solar development on these islands. Now, a working group is in the first phases of designing a microgrid pilot project for Providencia.

“It’s as if we have a blank canvas where we can try to develop a very good microgrid pilot that will allow us to integrate, in optimal fashion, all these energy transformation resources,” he said.

The planned construction of a 1.5 MW solar farm on Providencia, with the support of the state-run oil company Ecopetrol, will be a major step in this effort, Zuluaga said, adding that other initiatives are also being discussed to expand the use of solar power.

During a visit to Providencia in mid-January, Colombian President Iván Duque attended the official opening of a large plant nursery set up to help restore some of the vegetation lost to the storm. He stressed the importance of rebuilding in an environmentally responsible way, and laid out a challenge to “make Providencia the first zero-emissions municipality in Colombia.” Among other steps, he called for doing reforestation, protecting the mangroves, and substituting regular automobiles with cleaner alternatives.

“Given the small number of vehicles Providencia has, it is perfectly feasible, within 24 or 36 months, to encourage that substitution,” Duque said, “so that our vehicle fleet can be dominated by electric vehicles and other means of transportation that are more environmentally friendly, such as bicycles.”