Charging Ahead with EVs 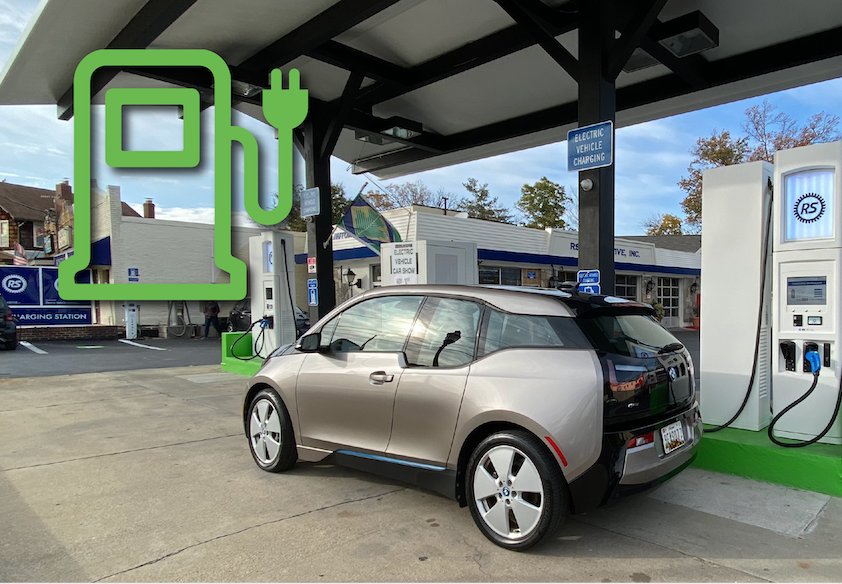 The road trip is a classic theme in U.S. popular culture and a staple of the summer vacation—a chance to recharge the batteries. For owners of electric vehicles (EVs), that’s not just a metaphor. Far from their usual home or work plug-in sites, they consult apps and map out routes that will get them to the next charging station down the road. The fear of running out of charge—range anxiety—has always been a barrier to EV adoption, especially in a country as big as the United States. But as longer-range electric vehicles come on the market and the charging infrastructure ramps up, that may be starting to change.

To be clear, most of the time EV owners charge their vehicles anxiety-free, in a home garage or a parking lot at work. According to the American Automobile Association (AAA), about 75% of charging happens at home.

The challenge comes when drivers venture outside the comfort level of their vehicle’s range and need to figure out where to refuel and how to do so most efficiently. Charging a vehicle can take a lot more time than gassing up, depending on the type of equipment used.

Most publicly available EV charging outlets in the country are classified as Level 2, meaning they provide 10 to 20 miles of range per hour of charging, according to the U.S. Department of Energy (DOE). By contrast, fast-charging Level 3 outlets—labeled DC, for direct current—typically provide 60 to 80 miles of range in 20 minutes.

Some branded, publicly available networks of charging sites have developed in recent years. One major player is Electrify America, a company started by Volkswagen as part of a court settlement over its diesel emissions violations several years ago. Under the terms of a 2016 consent decree, Volkswagen agreed to make a $2 billion investment—$800 million of that in California—in U.S. charging infrastructure and promotion of zero emission vehicles (ZEVs) over a 10-year period, from 2017 to 2027.“Why does the Holiday Inn in downtown Columbus, Ohio, have a charging station, but not the Sheraton or the Marriott? Why is the charger we used in Eugene, Ore., a long walk from anyplace to stay or eat? Why does the impoverished agricultural hamlet of Huron, Calif., have almost as many chargers as the entire city of Memphis, Tenn.?”

In June of this year, Electrify America announced that it had completed its first cross-country route of charging sites, located an average of about 70 miles apart along Interstates 15 and 70, stretching for about 2,700 miles from Washington, D.C., to Los Angeles, California. A second, more southern coast-to-coast route is expected to be finished in September.

The company now has about 2,000 chargers at more than 450 sites in the country, and by the end of 2021, it expects to have 3,500 chargers at 800 sites, according to Wayne Killen, Director of Infrastructure Planning and Business Development for Electrify America. These are high-powered chargers with top speeds of up to 350 kW—beyond what any vehicles on the road right now can handle but not all that far off from what car manufacturers are working on, Killen said.

“We are definitely building for the future,” he said in an interview. “That gives car companies the confidence to build that technology in, and not just get by with 50 kW DC fast charging, which for many years was the high-water mark.”

Electrify America is hardly alone in the charging industry. Other big brand names include ChargePoint, which claims to have the world’s largest network of EV charging stations, and Greenlots, which is now owned by Shell. EVgo has been around for a decade and claims to have the largest public fast-charging network in the United States—“and the first to be powered by 100% renewable energy.”

EVgo and General Motors (GM) just announced that they are teaming up to build more than 2,700 fast-charging stations over five years, tripling EVgo’s network of fast chargers. The focus of this new partnership will be on adding charging infrastructure in big cities, where many residents don’t have a garage where they can charge an electric vehicle. GM plans to bring at least 20 EV models to market by 2023, EVgo noted in a press release.

Even though electric vehicles still make up a tiny fraction of the cars sold in the United States—under 2% in 2019—it’s important to build “pre-awareness” by having plenty of visible charging infrastructure in place, according to Electrify America’s Killen. People need to have the confidence that “if I take this leap, there are going to be no anxieties,” he said. “Not only is it a great vehicle, but I know where I’m going to refuel it.”

The website of the DOE Alternative Fuels Data Center shows that the United States has 26,418 publicly available charging locations, and 3,899 of these (about 15%) have DC fast-charging capability. Wade, of EVI, cautioned that the database relies on voluntary data submission and therefore probably doesn’t capture everything; however, he believes the numbers for the more visible fast-charging sites are fairly reliable.

Here are a few of the trends seen in the EV charging infrastructure in the United States:

“I travel a lot more slowly. That’s a part of a battery-conservation thing. And when you stop, you need to stop for longer. And when you make those stops, you might stop [at] a place that you didn’t expect,” he said. “I think it’s possible that because electric vehicles take longer to fuel, they could change the pace of travel, make it more relaxed with longer stops. And I think that’s an intriguing option. That’s the part of travelling along in an electric car I’ve really enjoyed.”