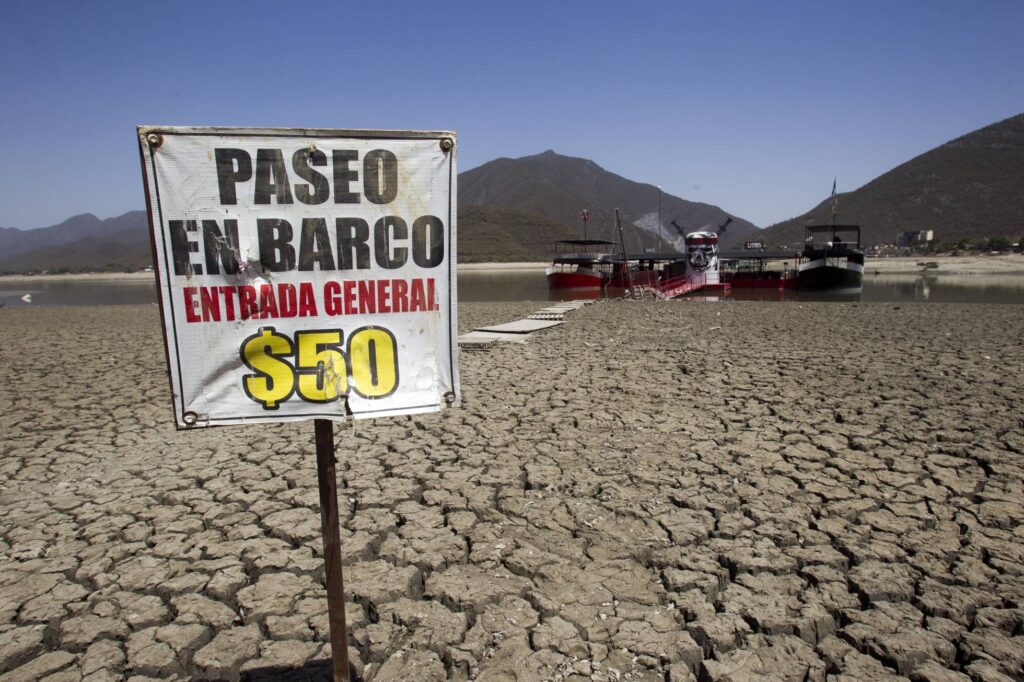 One of Mexico’s largest metropolitan areas has been grappling this summer with a severe water shortage. Now, faced with the likelihood that climate change will only bring more droughts in the future, local, state, and federal officials are trying to become better prepared.

The crisis in Monterrey—the capital of the northeastern state of Nuevo León—reached acute levels in June, July, and August of this year, when drought and other problems left this metro area of more than 5 million people unable to meet the population’s basic water needs.

Press reports showed desperate people standing in line in sweltering heat to fill buckets. Fistfights sometimes broke out, and in some neighborhoods, residents blocked streets to protest the shortages. The New York Times quoted the driver of a water delivery truck who said he had been forced under threat of kidnapping to detour from his regular route to another neighborhood instead. 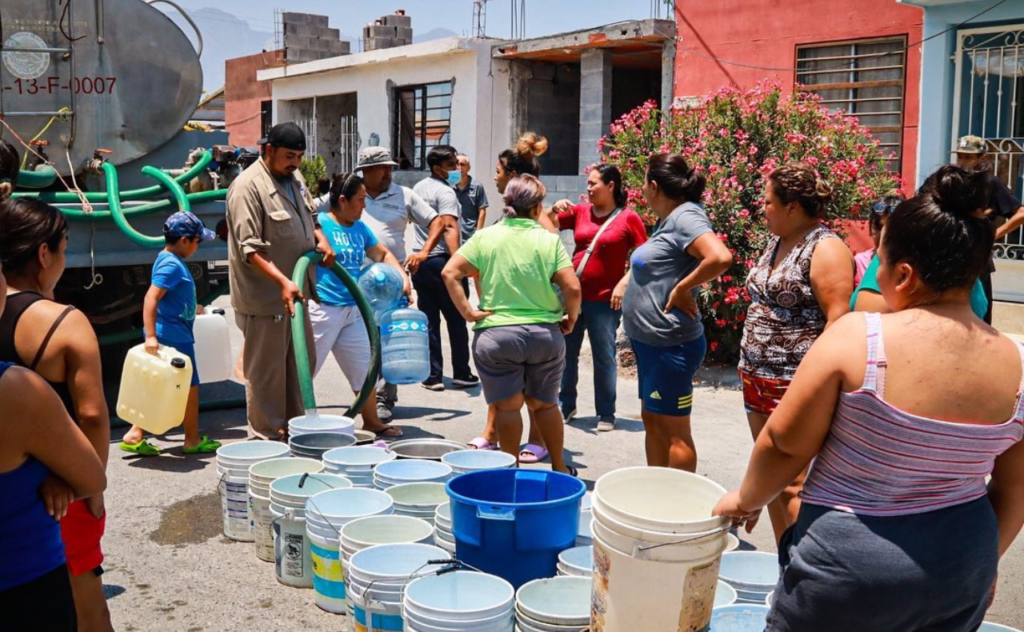 During the height of the crisis this summer, people in many neighborhoods in Monterrey had to stand in line for water. Photo: Servicios de Agua y Drenaje de Monterrey Twitter account.

In early July, Mexican President Andrés Manuel López Obrador issued a decree calling the water shortage in Nuevo León “a matter of national security.” It established that water concessions to private companies could be modified or reduced for a six-month period to ensure a sufficient supply of drinking water.

Recent rains and infrastructure improvements have helped ease the immediate crisis, but that doesn’t mean the problem is solved, according to Miguel Treviño, Mayor of San Pedro Garza García, one of the municipalities in the Monterrey metro area.

“It’s getting better, but it’s very serious, with short-term, mid-term, and long-term implications,” he said in an interview in early September. And climate change means that the Monterrey area—along with other parts of the country and the world—will continue to face big challenges.

The Cost of Success 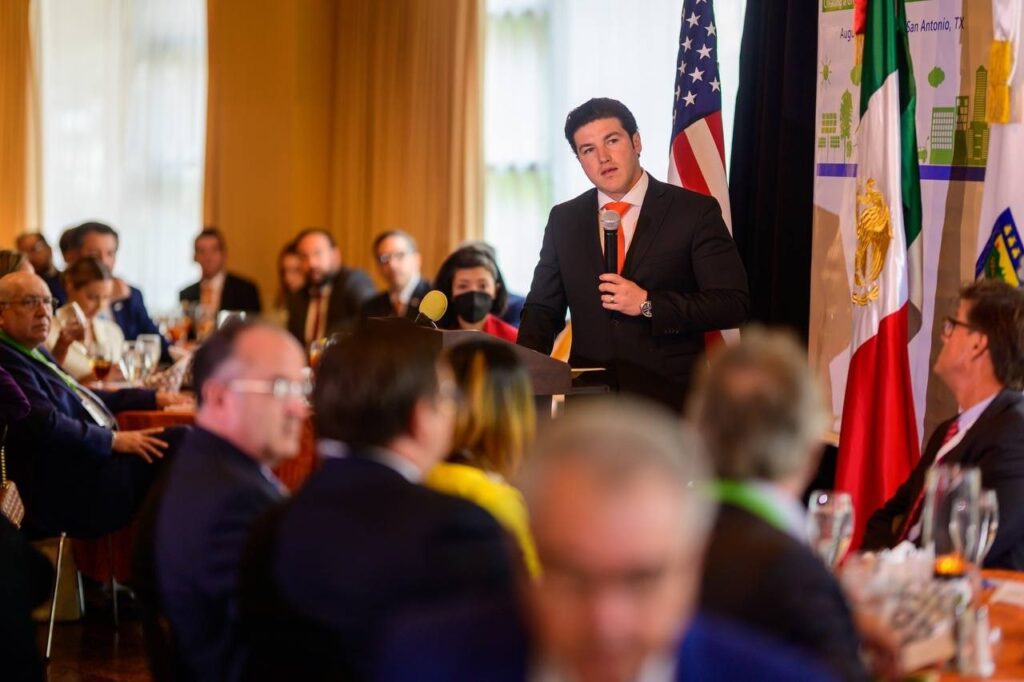 At the annual U.S.-Mexico Border Environmental Forum, Nuevo León Governor Samuel García said that investments in water infrastructure in his state have not kept up with growth. Photo: Samuel García Twitter account.

In a sense, Nuevo León has been “a victim of its success,” said García, who took office in October 2021. The state has a strong economy and a large industrial base, and has been successful in attracting foreign investment and creating jobs. But over the years, investments in water infrastructure have not kept up with growth, he said. That became a major problem this summer in the metropolitan area of Monterrey—home to over 90% of the state’s population, according to García.

Nuevo León normally relies on three reservoirs for much of its water, but two of them dried up this summer. (The governor’s recent presentation included a photo of the bone-dry floor of the reservoir at La Boca Dam, with a sign in the foreground advertising boat rides.) A break in the pipeline at El Cuchillo Dam complicated the situation even further. The week of Father’s Day, García said, the Monterrey metro area had its worst water crisis ever, with a deficit of 70%. That has since come down to 15%, he said. 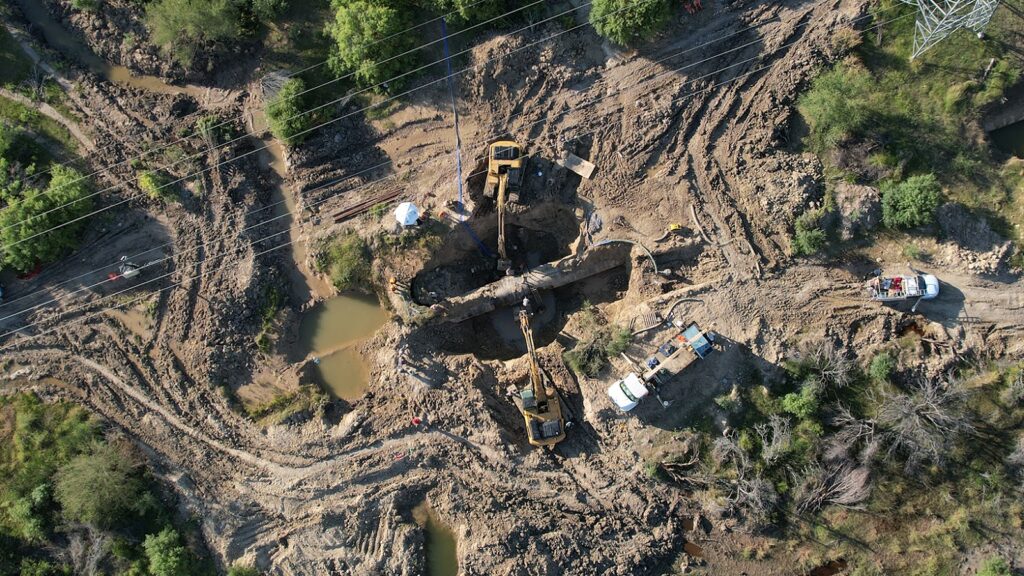 In his presentation, the governor detailed some of the short-term measures being taken to alleviate the problem: launching a water conservation media campaign, drilling new wells, installing pressure regulators, deploying more than 400 water delivery trucks, putting large water tanks in community centers, repairing pipeline leaks, even seeding clouds with silver iodide to increase precipitation. Longer-term measures are also underway in the state, including the construction of a new dam, called Libertad, and a new water pipeline at El Cuchillo.

Options for bringing in water from outside Nuevo León are also on the table, García said, including the possibility of a regional desalination plant that could serve parts of Mexico and Texas. Wastewater management and enforcement of water laws are among other areas that need more attention, he said.

In May of this year, García unveiled a master plan for a series of investments designed to ensure the state’s water supply through 2050. The estimated price tag: 25 billion pesos (US$1.25 billion).

As important as these types of investments are, solving the water supply issue is a complex undertaking that has to involve the whole population, García said—including the educational system, the agricultural sector, and heavy industry. “It’s not only about making aqueducts or more dams,” he said. 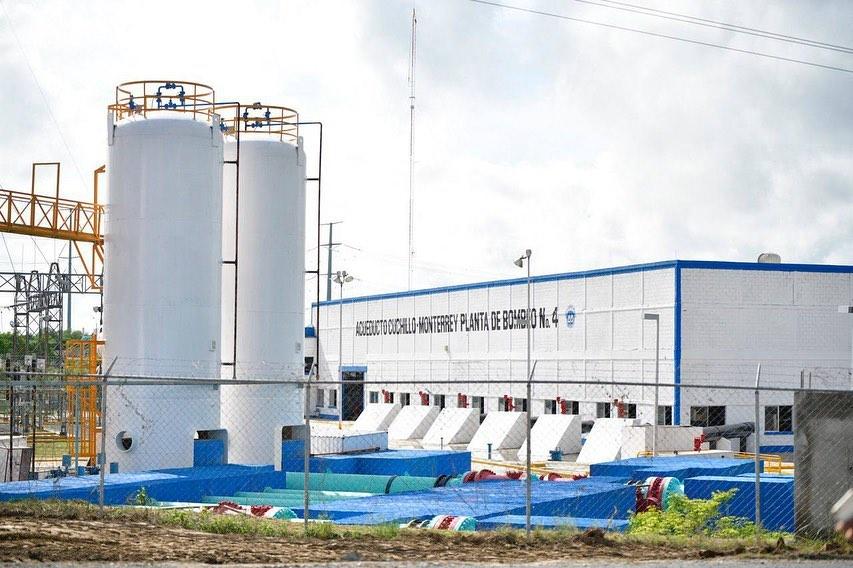 A pumping station on the pipeline from El Cuchillo Dam, a key source of water for Monterrey. Photo: Official Instagram account of government of Nuevo León.

About 70% of the water available in the state goes to agriculture, but much of that is lost to evaporation, according to García, who said that better irrigation technology is needed. Industry must also play a role, he said, by recycling the water it uses.

García did not mention any industries in particular, but at a press conference in early August, Mexico’s president drew international headlines when he singled out the beer industry. Large breweries in Monterrey produce several major brands, including Heineken, Corona, Modelo, and Dos Equis.

López Obrador noted that Mexico is by far the world’s largest beer exporter—he brought out figures showing that last year, the country’s beer exports totaled more than US$5 billion—and suggested that companies should no longer be allowed to locate breweries in arid areas.

“This is not to say we won’t produce any more beer, it’s to say that we won’t produce beer in the north. That’s over,” he said, adding that beer manufacturers would be welcome in the south or southeast. The same kind of consideration should apply to other types of production too, the president said.

“It’s no longer an option to give permits where there is no water or where the water tables are completely depressed,” he said.

In San Pedro—an affluent municipality on the southern edge of the metropolitan area, up against the Sierra Madre mountains—Mayor Treviño said the crisis has prompted the city government to become more vocal about the need for people to use less water.

“I am very straightforward with the citizens of San Pedro, and I have told them that before the crisis, we were not an example in terms of water consumption,” he said. “We were almost double  the average  of the rest of the metropolitan area.”

Recently, he added, consumption levels have started to come down. “I think every crisis brings an opportunity, and we are using this crisis to become better citizens in the use of our natural resources,” Treviño said.

In the city’s parks and other public spaces, that has meant watering the trees with second-use water, when possible, and sometimes not watering the grass at all. Most of the water supply in the municipality of San Pedro comes from groundwater, not dams, but the entire metro area was under water rationing measures during this summer’s crisis, including planned cuts during most of the afternoon and evening.

Unlike some other parts of the Monterrey area, San Pedro does not have much industry; its economy is more geared toward commercial and service businesses. The most effective way San Pedro can tackle climate change, Treviño said, is to work on lifestyle: “where we live, how we move, what are our daily routines.” 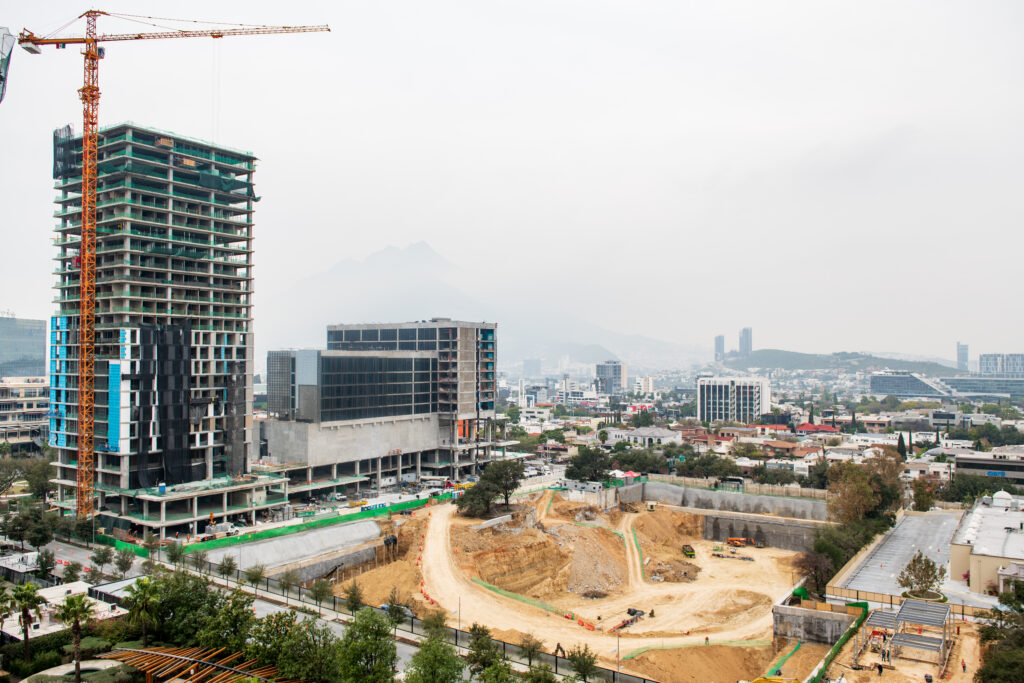 New office and apartment buildings continue to go up in the Monterrey metro area, home to most of the state’s population.

“We were a municipality where the aspiration of every family was to live in a house with a big garden. That is not possible any more for younger generations,” the mayor said. Instead, he said, the city is “learning to grow vertically,” to think about apartments rather than single-family houses and to increase public green spaces instead of assuming that every home has to have its own yard.

Young professionals tend to be more receptive to that kind of message than older generations, according to Treviño. When his administration put in a dedicated bicycle lane on one of its avenues, the people who were angry about the reduced space for vehicles tended to be “my age or older,” the 50-year-old mayor said. Most younger adults, he added, were happy with that type of change. “They have seen it in other places and they know the world is moving in that direction.”

At the American School Foundation of Monterrey (ASFM), a private English-speaking school located in San Pedro, Superintendent George Stewart expected that the summer’s water crisis would lead to teaching moments about the environment.

“There’s a lot of genuine interest among the students for change,” Stewart said—not only on environmental concerns, he added, but on issues related to equity, justice, diversity, and inclusion.

In an interview in August, Stewart said that the school, which has about 2,500 students from preschool through high school, was developing contingency plans to handle any water shortages in the future. It was also looking at ways to further improve water efficiency, he said, although it had already reduced its consumption significantly.

“All of our grass fields are on life support only,” he said. “If you were to look at our campus, it looks brown.”

In his remarks at the Border Environmental Forum, Nuevo León Governor García stressed that per capita water consumption in the Monterrey metropolitan area is “not sustainable,” and said the government needs to provide incentives for people to use less.

After three difficult months, this particular water crisis is coming to an end, but the problem is not just in Nuevo León, García said. He pointed to a study published earlier this year by the University of California, Los Angeles (UCLA), which showed that the “megadrought” that has affected California and the American West for more than two decades is the driest such period in 1,200 years.