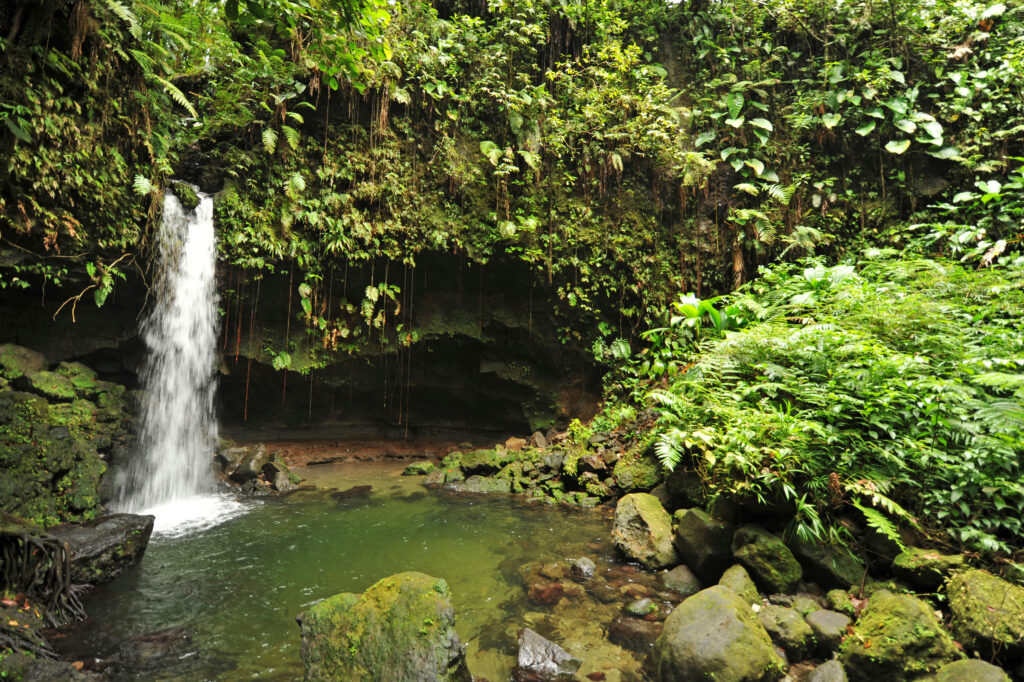 Nearly four years ago, Hurricane Maria dealt a heavy blow to the Nature Island of the Caribbean, as Dominica calls itself. The storm slammed into the island with Category 5 ferocity, causing dozens of deaths, leveling structures, uprooting trees, and stripping the leaves off of those still standing. Fast-forward to today, and Dominica is as green as ever. From a distance, a forestry official says, the forests in Morne Trois Pitons National Park look much as they did pre-Maria. But step a little deeper into the trees and it’s clear that nature will need more time to fully recover.

Just last week, Assistant Forest Officer Cyrille John hiked along the park’s Emerald Pool Trail to check for any signs of damage from Hurricane Elsa—the first Atlantic storm of the 2021 season to strengthen into a Category 1 hurricane. Dominica was not in Elsa’s direct path, but the island did get some strong winds from the storm’s outer bands, and on his hike, John could see fallen branches on the forest floor that had snapped off high up in the trees.

Some of the trees that stayed standing after Maria are more vulnerable than they may appear, he said in a phone interview. “They are still alive, but if they were to face a direct hit from a Category 1, they would topple over.”

When people look up at 100-foot trees in a rainforest, they might assume that their roots run deep, but that is not the case, according to John. Much of the root system is lateral, he explained, and the trees depend on each other for stability. He likens the forest to a crowd of humans.

Even though Dominica’s forests are not yet back to normal, the pace of nature’s recovery has been nothing short of “remarkable,” said John, who has worked in the Ministry of Environment’s Forestry, Wildlife and Parks Division for three decades and in its National Parks Unit for a third of that time. After Maria, he said, the island looked like it had been bombed. 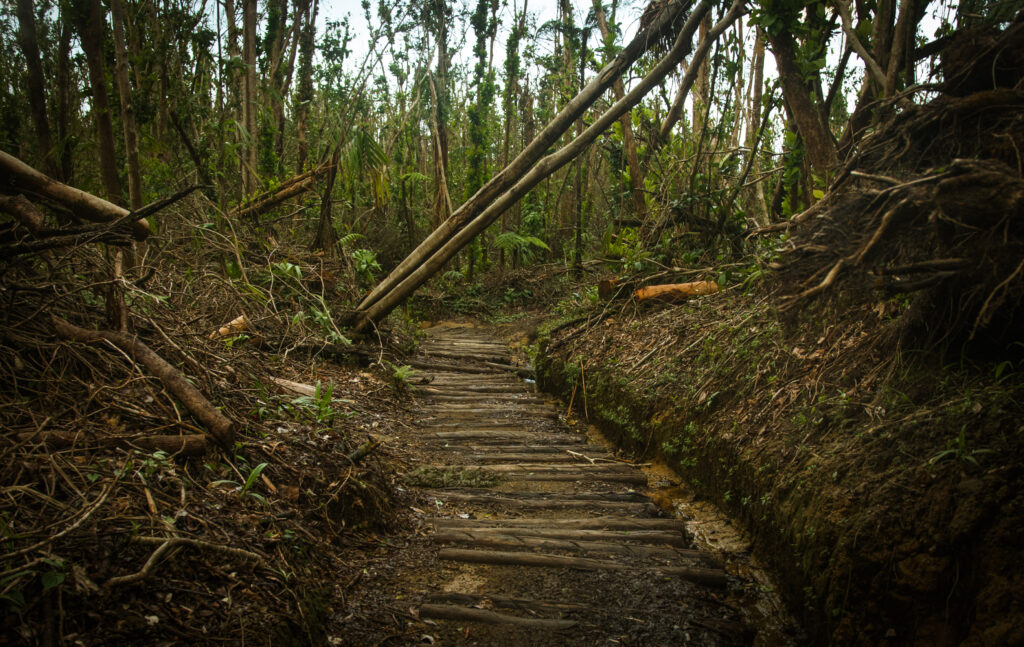 “It was really, really, really heartbreaking the morning after Hurricane Maria. You looked at Morne Trois Pitons, and it’s like Dominica was stripped naked. You could see every valley, every crevice, every rock. You could just see everything and the extent of the devastation.”

In a nation where about 60% of the land is forested, many areas were entirely defoliated. “It’s like a swarm of locusts just descended on the forest and ate every leaf,” John said. After Maria, for the first time in his life he could stand on his porch in the community of Salisbury, on the island’s western coast, and watch wild parrots forage for food, as they could no longer find fruits and seeds in their normal habitat. Eventually, the parrots returned to the rainforest. 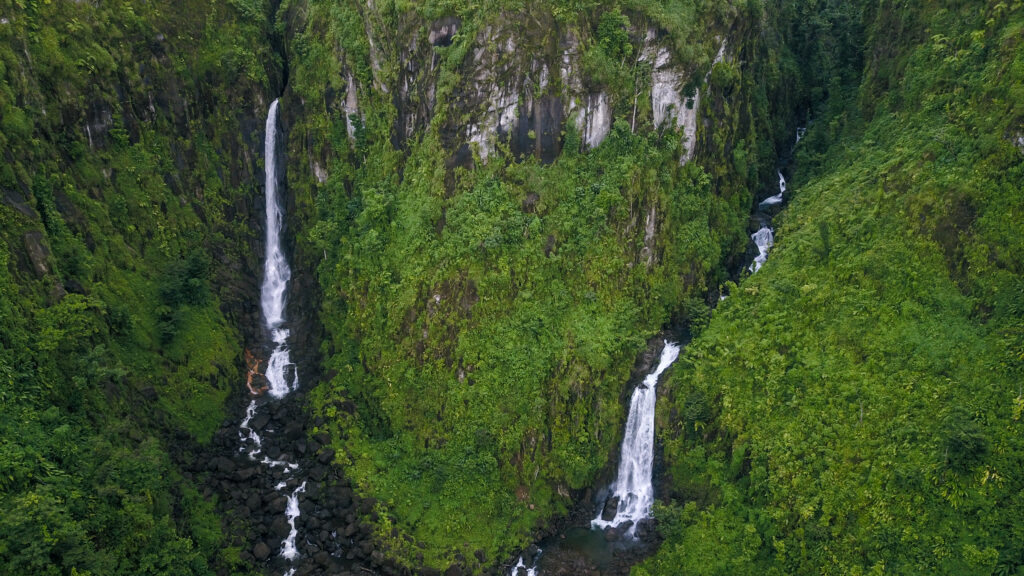 Located in the Windward Islands of the Eastern Caribbean, Dominica is a small, mountainous country with a population of about 72,000 and a geographical area of 290 square miles, close to 20% of which is protected by law.

Morne Trois Pitons National Park—the name, which means mountain of three peaks, comes from French Creole—is the largest of three national parks in Dominica. It was established in 1975 and declared a UNESCO World Heritage Site in 1998. The UNESCO website sums up the park this way:

When children are out of school during the summer, as they are now, parts of Morne Trois Pitons are popular areas for swimming and picnicking. During the months of October through January, which in normal times are peak cruise season, the area also attracts many international visitors. 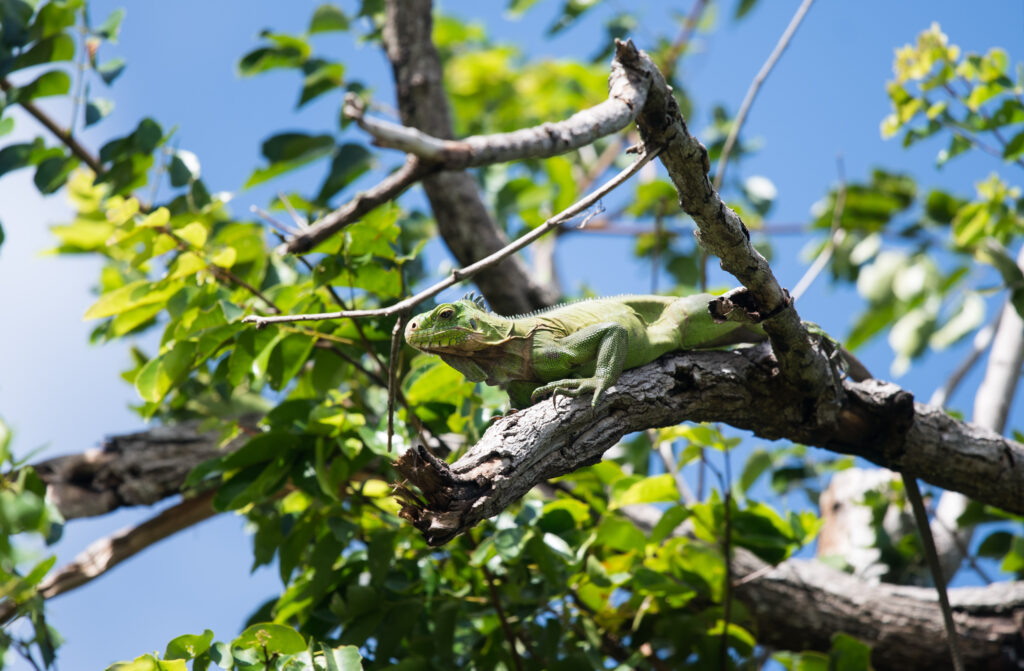 The experience of visiting Morne Trois Pitons is not yet the same throughout the park as it was before Maria. The hurricane battered the rainforest canopy, and many trees lost their crowns completely. Because of the thinner canopy, more sunlight now reaches the forest floor, and some areas along hiking trails have seen an explosion of razor grass—which, as the name implies, can be treacherous on hikers’ legs.

John believes it could take a decade for the forest canopy to regain the thick, closed structure that it once had. Still, he said, the forest is back to functioning as an ecosystem.

Scientists say that as a result of climate change, storms like Hurricane Maria will become more frequent and more severe. Park officials are looking at how they can adapt to this new reality, whether by strengthening the roofs of structures within the national parks or improving drainage in areas that had major landslides.

“Whatever can be adapted will be adapted,” John said. But, he said, “as far as the natural vegetation is concerned, there’s very little that we can do in terms of adaptation.”

The forest, for its part, is hard at work on its own restoration. The storm left a huge amount of leaf litter on the forest floor, which has been decomposing rapidly in Dominica’s high temperatures and high humidity. The trees have been able to uptake the nutrients to grow new branches and leaves and “return Dominica to the green paradise of the Caribbean,” as Cyrille John put it.

“It is heartening that within the destruction that has taken place in the forest, the remedy for its recovery is right within that destruction,” he said.