Wind and solar projects have been multiplying in Colombia in the past two years, and President Iván Duque recently announced plans for another major renewable energy auction in 2021. Although hydroelectric power is still the main course on Colombia’s energy menu, the appetite is growing for non-conventional renewables. With its abundant resources and solid regulatory framework, Colombia is well positioned for “exponential” growth in this industry, according to the country’s Renewable Energy Association, SER Colombia. 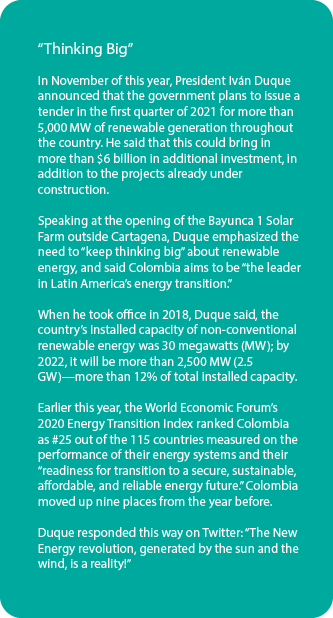 High levels of solar radiation throughout the country and reliable winds in several regions, especially in the northern coastal department of La Guajira, strongly favor the development of these renewables, according to SER Colombia’s Executive Director, Germán Corredor. “As far as potential goes, we have all we want,” he said in an interview.

That doesn’t mean solar and wind power will replace every other type of energy, he explained, but they do serve as an “interesting complement”—especially to hydropower, which accounts for more than two thirds of the electricity generated in the country.

In years when Colombia experiences drought—as it does during the ocean-warming phenomenon known as El Niño—it has higher levels of solar radiation and stronger winds, “so that helps to replace that shortfall of water,” Corredor said.

“Having an important share of non-conventional renewables in the system makes the electric grid much more efficient and robust,” he added.

If it has taken Colombia a bit longer than some other Latin American countries to develop its solar and wind resources, that is partly due to its wealth of options, according to Corredor, who has more than 35 years of experience working in both the public and private sector on energy issues in Colombia. For example, he said, it made sense for Chile to be an early adopter, because that country does not have petroleum or coal and relied heavily on energy imports.

Colombia, by contrast, not only has enormous hydroelectric capacity, but it has coal and petroleum too. That meant it could wait to turn its attention to wind and solar until the global industry was more established and the costs more competitive, Corredor said.

Colombia took the first big step toward boosting non-conventional renewable energy in 2014, with the adoption of Law 1715. That law and its accompanying regulations established a framework of tax incentives that began to attract renewable energy companies and investors.

SER Colombia, for its part, got its start in early 2016, when 19 renewable energy companies decided to form a nonprofit association to promote the sector and represent its interests. It now has 71 members.

Corredor believes a solid foundation is now in place for the renewable energy industry to take off. “We’re in the initial stages, but the potential is significant,” he said. “The growth is going to be exponential, as it has been around the world.”

Wind and solar power still account for a tiny fraction—less than one percentage point—of the country’s installed capacity of around 17.6 gigawatts (GW), but dozens of projects are in the pipeline.

The renewable energy auction showed that the incentive framework in place allows companies to offer competitive prices, Corredor said. “The auction prices were substantially lower than the average market prices,” he added.

Solar and wind projects were also among the successful bidders in a separate auction for firm power, which included all energy technologies. However, because of their intermittent nature, renewable energy resources can offer a much smaller percentage of firm power than thermal plants can, according to Corredor.

Many other renewable energy projects are also being developed outside the official auction process, through direct contracts. And one energy supply company, Renovatio, announced recently that it was launching the country’s first private auction for renewable energy. The idea is that it will secure long-term contracts for clean energy, which it will then sell to end users.

It’s not unusual for companies to buy and sell energy for large-scale customers in the non-regulated portion of Colombia’s electricity market, Corredor said, but he added that Renovatio is breaking ground by offering long-term contracts and by buying only non-conventional renewable energy.

Just how much of the country’s installed capacity could someday come from sources like solar and wind? If the government holds a new auction, Corredor said, it’s possible renewables will account for 18% or so of capacity within the next four years.

“I don’t think it’s farfetched that in 2030 we could reach 25%. I think it’s very possible,” the representative of SER Colombia said.

Eventually, in addition to supplementing hydropower, renewable energy could start to substitute some fossil fuels—beginning with liquid fuels such as diesel and fuel oil, which tend to be expensive, Corredor said. All fossil fuels, including natural gas and coal, currently account for close to 30% of Colombia’s electricity production, according to figures from the Ministry of Mines and Energy.

Colombia’s grid will continue to rely predominantly on hydroelectricity, Corrredor said, although he noted that large dam projects are encountering more opposition and becoming more difficult to develop all around the world. In Colombia, the massive Hidroituango hydroelectric project suffered a major setback during its construction, when a bypass tunnel collapsed in 2018. Although the project is now expected to be finished in 2023, it is not clear what the effects of legal problems will be, according to Corredor.

While he sees additional large-scale hydropower projects as unlikely, Corredor believes some small hydropower plants could help supplement the country’s future energy needs, in addition to solar and wind.

One step in implementing the projects currently underway involves prior consultation with indigenous and ethnic communities that will be affected. Such consultations, which are a constitutional requirement, were temporarily suspended earlier this year due to the Covid-19 pandemic, Corredor said.

The consultations are particularly important in a region like La Guajira, which is home to the Wayuu indigenous people. A wind farm might affect several small communities, while a transmission line that cuts across the territory might have an impact on 200 communities. Representatives of the energy companies meet with those affected to explain the project, listen to any concerns they might have, identify needs, and work out compensation.

“If that is not done, there is no project,” Corredor said. Despite some delays during the first few months of the pandemic, he said, the consultation process has now resumed with a combination of virtual and in-person meetings.

Corredor believes that renewable energy jobs can play a role throughout the country in reactivating the economy as Colombia seeks to recover from the pandemic. In the next two to three years, he expects this sector to create some 15,000 direct jobs, in addition to generating indirect employment and business activity. And, he said, these types of projects can usually get underway relatively quickly, once the contracts are in hand.

“I’m convinced that the more renewable energy we have, the better for everyone. It’s an environmental benefit, it’s a social benefit, it’s an energy benefit,” the SER Colombia Executive Director said. “The country needs this.”