From the Ocean, a Cure for Cow Burps 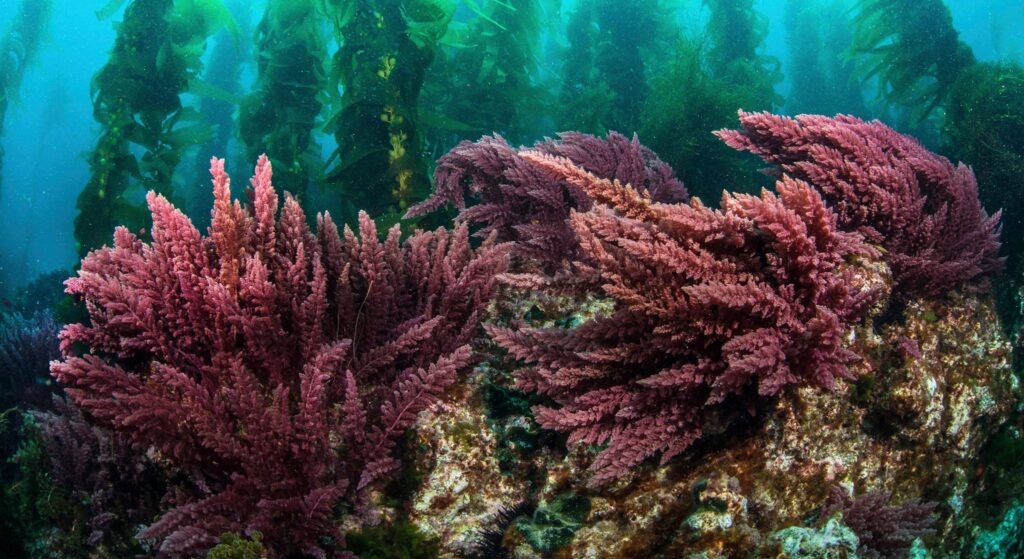 A cow grazing placidly in a field might as well be a gas-guzzling vehicle, given the quantity of methane it belches out during the digestive process. But a species of seaweed may hold the answer to that particular emissions problem—if scientists and entrepreneurs can figure out a way to produce enough of it.

The seaweed—a feathery red species called Asparagopsis taxiformis—grows in tropical and subtropical waters all over the globe, including along the Pacific and Atlantic coasts of the Americas and throughout the Caribbean Sea.

Even though it’s not rare, the seaweed does not occur in nature in the quantities that would be needed to feed the world’s billion-plus cattle, according to Dr. Jennifer Smith, a marine botanist at the Scripps Institution of Oceanography at the University of California San Diego, who has been studying the species for the past three years.

“It’s never going to be wild-harvested in the ocean for commercial sale. It’s just not abundant enough,” Smith said in an interview. However, she said, the fact that the seaweed grows naturally in so many places suggests that it could be cultivated in a wide range of settings without introducing invasive or non-native species to an area.

The seaweed can be cultivated in land-based tanks or in the open ocean on lines strung between buoys. Before it can be used for feed, it needs to go through a purification process. “You can’t just go collect some from the ocean and stick it in a tank and immediately you have a farm,” Smith said. 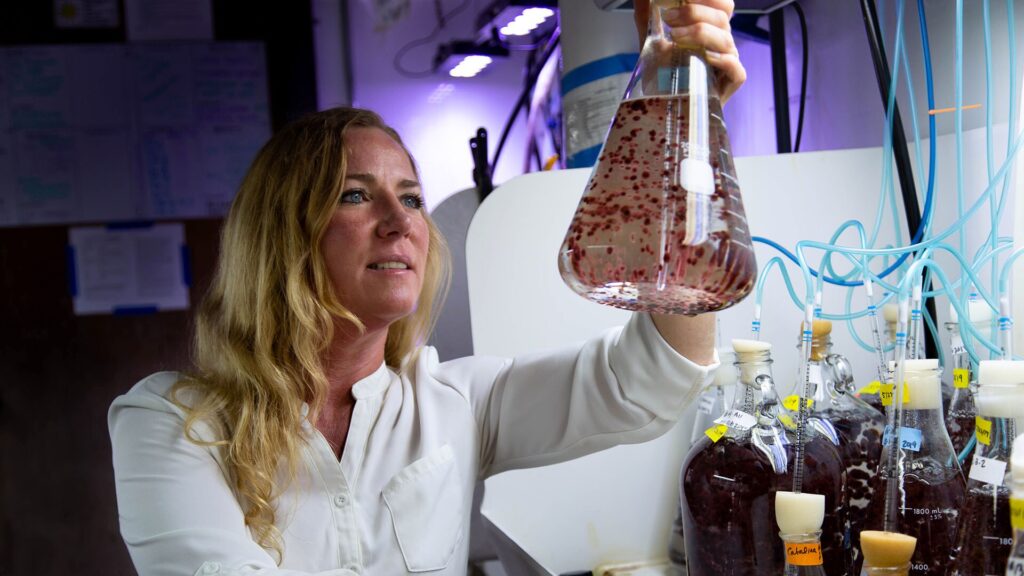 Jennifer Smith has been studying the seaweed species Asparagopsis taxiformis in her laboratory at the Scripps Institution of Oceanography. Photo by Megan Snedden.

“In my lab, we’re basically working on developing cultivation techniques for growing the species to try to better understand how to grow as much of it as fast as we can,” she said. She has also been working to identify the hardiest strains of the seaweed and maximize the production of the chemical compounds that have been shown to drastically reduce the methane produced by cows and other ruminants.

Eventually, she hopes that Scripps could become something like a “global seed bank” for the seaweed, with specialized strains developed for different marine environments. Given the size of the global livestock population, she believes the seaweed will create opportunities for new jobs and even a whole new industry.

The methane-reduction potential of Asparagopsis taxiformis was discovered a few years ago in laboratory tests conducted by researchers in Australia. Their findings led to a flurry of research and scientific trials, along with the first waves of venture capital. Today, seaweed additives for cattle feed are starting to make their way to a limited number of farms and ranches.

Now, Smith said, one of the biggest questions is how to achieve the kind of scale needed for real impact. “How are we going to get enough seaweed to feed all the cows? It’s a big challenge,” she said.

It’s also an urgent one, due to the growing pressure in many places around the world to get a handle on methane emissions as a way to help meet climate targets. In California, for example, the law requires dairy and livestock operations to cut their methane emissions to 40% below 2013 levels by 2030. 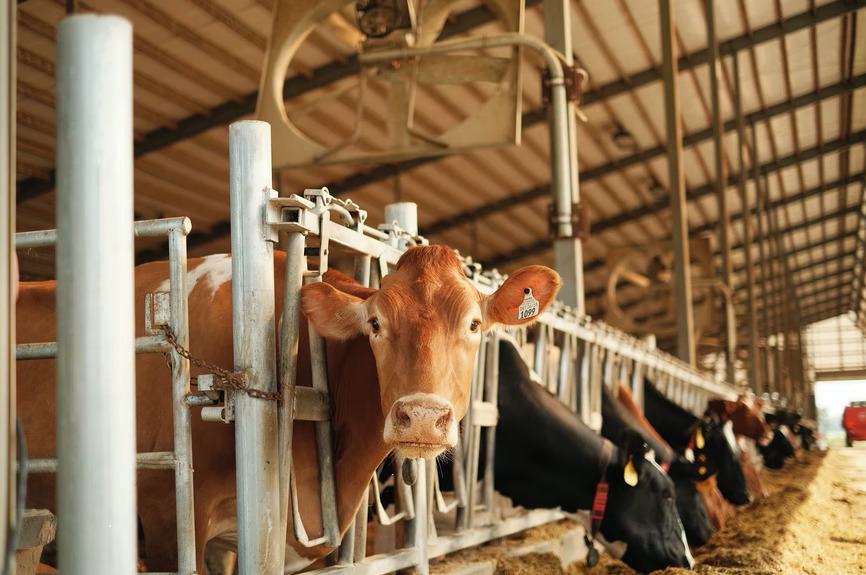 Adding a tiny amount of seaweed to cows’ diet has been found to reduce their methane emissions by over 80%.

The livestock supply chain accounts for about 14.5% of all human-induced greenhouse gas emissions, according to a 2013 report published by the United Nations Food and Agriculture Organization. The production, processing, and transport of feed is the biggest source of emissions within the sector, the report said, followed by emissions from the digestive process of ruminant animals.

Cattle, sheep, goats, buffalo, and other ruminants are grazing animals capable of digesting high-fiber grass or straw through a process known as enteric fermentation. Microbes in the digestive tracts of these animals decompose and ferment their food, producing methane as a byproduct.

Dr. Ermias Kebreab, an animal scientist at the University of California Davis, summed it up this way in a TED talk earlier this year: “We have a methane problem from cows.”

And it’s not necessarily what people think, he explained to the audience. “Despite what you might have heard about methane and cows, most of the methane is actually burped out—not through the back end,” he said.

When he saw the promising lab results from Australia, Kebreab decided to test the seaweed on live cows, to figure out how much of it would need to be added to their feed and how significantly it would reduce their methane output. There were other questions too: Would the microbes in the cows’ guts get used to the seaweed and go back to producing methane over time? Would the seaweed remain stable in storage? Would the cows like the taste? Would the seaweed affect the animals’ health? Would it change the taste of the beef or milk?

Kebreab and his team discovered that adding a tiny amount of seaweed to the cows’ diet reduced their methane emissions by over 80% without interfering with food digestion or producing any adverse health effects; in fact, the beef cattle bulked up more with the seaweed in their feed. And in controlled studies, he said, people could detect no difference in taste.

So far, according to Kebreab, the seaweed has produced the biggest reductions in cows’ methane burps, but other feed additives—including garlic and citric extracts—have also been found to have some methane-reducing effect. 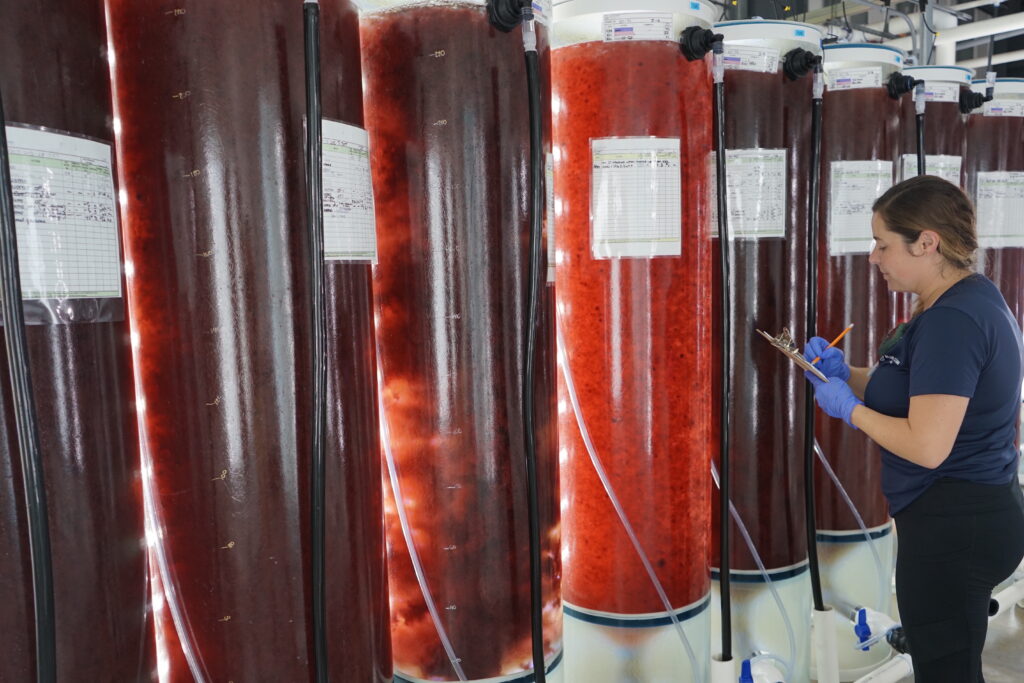 Both Smith and Kebreab have been scientific advisers to a company called Blue Ocean Barns, one of several start-ups around the world working to develop and market seaweed additives for cattle feed.

Blue Ocean Barns is cultivating Asparagopsis taxiformis in land-based tanks at its facility at the Hawaii Ocean Science & Technology Park in Kailua-Kona, on Hawaii’s Big Island. Currently, it is selling the seaweed to a handful of select customers, under the brand name Brominata. These customers, including the ice cream company Ben & Jerry’s, are committed to meeting science-based targets to reduce their carbon footprint—not just by buying carbon offsets, for example, but by reducing emissions in their own operations, according to CEO of Blue Ocean Barns, Joan Salwen.

“They absolutely have to take the emissions out of their own shop, which is a really high standard—especially if you have cows in your supply chain,” she said in an interview. Some companies in the dairy or meat sector have told Salwen that they have already put solar panels on their buildings and changed their fleet to electric vehicles, but they need to address the problem of cow digestion if they are going to meet their carbon targets.

The seaweed added to the cattle feed makes up only about 0.3% of the cow’s diet. The carbon reductions that result are especially attractive because they are immediate, according to Salwen. “The day that the cow eats a bit of this seaweed, she stops burping methane, so you don’t have to wait for the forest to grow up over 20 years,” Salwen explained.

And, she said, the reduction in methane production is permanent. “Once the methane emissions from that meal are not emitted, they are never emitted,” she said—unlike a forest, in which gains may be reversed if the trees burn or are cut down.

Another attractive feature of seaweed, she said, is that it is a nature-based solution. “We are drying and minimally processing a photosynthesizing plant that is a feedstock just like everything else the cow is eating, whether it’s dried alfalfa or dried clover or whatever. We’re just another dried plant, so it’s quite attractive to these customers,” she said. 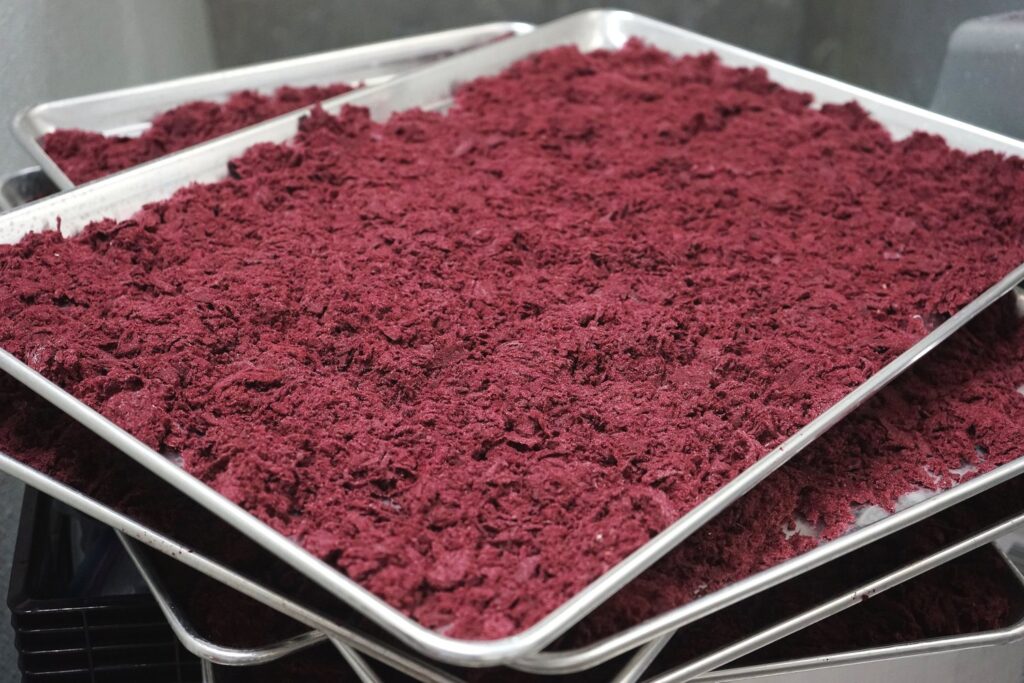 The companies pay Blue Ocean Barns to provide the seaweed to farmers and ranchers in their supply chains. The companies get “auditable, verifiable proof” of their reductions in greenhouse gas emissions—Blue Ocean Barns works with an independent carbon registry called Verra to provide this— and the farmers and ranchers get the additive at no cost to them.

This month, Blue Ocean Barns announced that it had raised an additional $20 million in venture capital, which Salwen said “really affords us the opportunity to build out the tank-based cultivation that we need to have the impact we envision.” The company has said that its goal is to curb methane emissions from a million cows within four years and 100 million by 2030.

“It’s not a layup,” Salwen said, “but it is definitely within our reach.”

Some skeptics of efforts to reduce methane emissions from the livestock industry argue that it would be better for the planet if people just stopped drinking milk or eating meat instead.

“I agree that we shouldn’t be eating meat every day,” Jennifer Smith said. “I think we can all try to lessen the footprint of that, but I can also guarantee that this is not going away any time soon.”

Weaning people off meat is somewhat like weaning them off gasoline-powered cars, she said. “If we could all be driving electric cars today, that would be great, but you know what? We’re not,” she said. Besides, she added, even if people suddenly stopped eating meat, there’s the matter of what to do about the billion or so cows and probably another billion sheep and goats that are already on the planet. 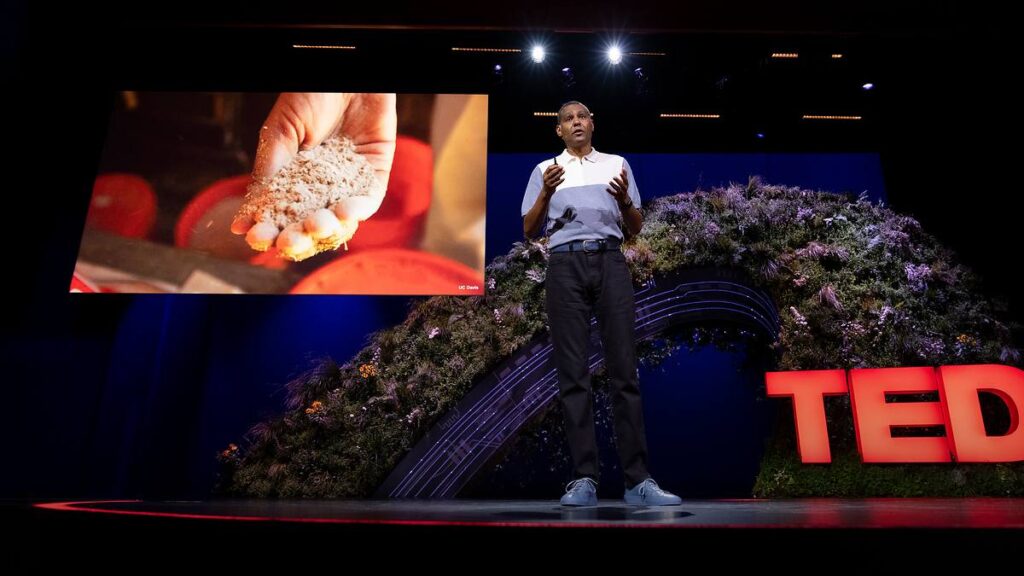 “We have a methane problem from cows,” says Ermias Kebreab, an animal scientist at the University of California Davis.

Ermias Kebreab pointed out that in many parts of the world, meat and milk provide key nutrients that people would not get through other parts of their diet.

Of course, consumers in some countries eat a lot more meat than in others. In his TED talk, Kebreab showed a graph on meat consumption per capita, showing the United States as the biggest consumer, followed by Australia, Argentina, Uruguay, Brazil, and Chile. Paraguay, Mexico, Peru, and Colombia are also among the world’s top 20 meat-consuming countries.

Cover image: A feathery red species of seaweed called Asparagopsis taxiformis, which grows in tropical and subtropical waters all over the globe, could significantly reduce methane emissions from livestock.