Consider these two seemingly unrelated problems: Solar and wind energy are intermittent, and fresh water is often in short supply. An integrated system that combines existing technologies—and that runs entirely on renewable energy—could solve both those problems at the same time, an engineer from the Massachusetts Institute of Technology maintains. And, he says, several sites in the Americas have the perfect topography for putting such a system to the test. The key is to have mountains next to the sea.

All the technology needed for this combination water-and-power system already exists, says Alexander Slocum, the Walter M. May and A. Hazel May Professor of Mechanical Engineering at the Massachusetts Institute of Technology (MIT) and lead author of a paper on the subject published in the journal Sustainable Energy Technologies and Assessments. 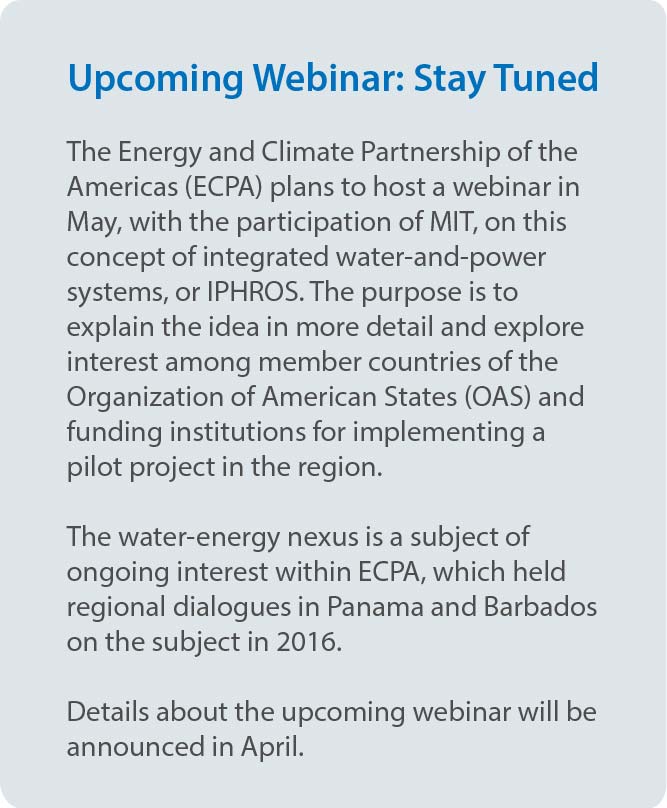 The system he envisions brings together a pumped hydro system to store energy and produce backup power for wind and solar power systems and a reverse osmosis system to desalinate water. The first piece of that, the pumped hydro, stores water—and therefore —in a lined reservoir built at a high elevation next to the sea.

“It’s a giant battery to go along with wind and solar,” Slocum explained in a phone interview. “We’re going to need big batteries, because the wind does not always blow, and the sun does not always shine.”

Water is pumped up to the reservoir, using wind or solar energy, and stored. When the wind isn’t blowing, or the sun isn’t shining, water is released through pipes and flows through turbines, generating electricity on its way back to the sea. In other words, an intermittent source of energy can now be constant.

The second part of the system is the desalination plant, which uses a reverse osmosis process to extract fresh water from salt water. The process, which involves forcing water under pressure through semipermeable membranes, normally requires significant energy; it also generates about one liter of brine, which is very salty and toxic to marine life, for every liter of fresh water produced.

Under what Slocum calls an Integrated Pumped Hydro Reverse Osmosis System (), about 5 percent of the water from the reservoir would be diverted to a reverse osmosis plant instead of going to the power turbines. The downward pressure of that column of water would power the desalination process and eliminate the need for the high-pressure pumps used in existing reverse osmosis systems. Slocum said such a plant could produce enough fresh water to meet all local needs, including for agriculture and industry.

Currently, one expensive part of desalination is dealing with the brine that is left over once fresh water has been extracted. It can’t be discharged directly into the sea, so it has to be pumped out long outflow pipes to slowly mix with sea water. With an integrated system, the brine could be released into the massive flow of water going through the turbines, which would dilute it to safe levels, Slocum said.

Pumped hydro storage is already in wide use in Switzerland, to cite one example, and a system using has been operating successfully for years in Okinawa, Japan. Reverse osmosis plants, meanwhile, are used in many arid parts of the world. “You wouldn’t have the modern Middle East without reverse osmosis,” Slocum said.

The idea of combining these power and water systems is not original. Slocum said a Japanese researcher working for the United Nations came up with the concept in the 1970s, but nothing came of it at a time when fossil fuels were cheap, renewables expensive, and climate change a less pressing concern. Now, Slocum said, the circumstances are very different. “If the world does not quickly evolve into a renewable-based energy society, game over for everyone, no matter how wealthy you are.” 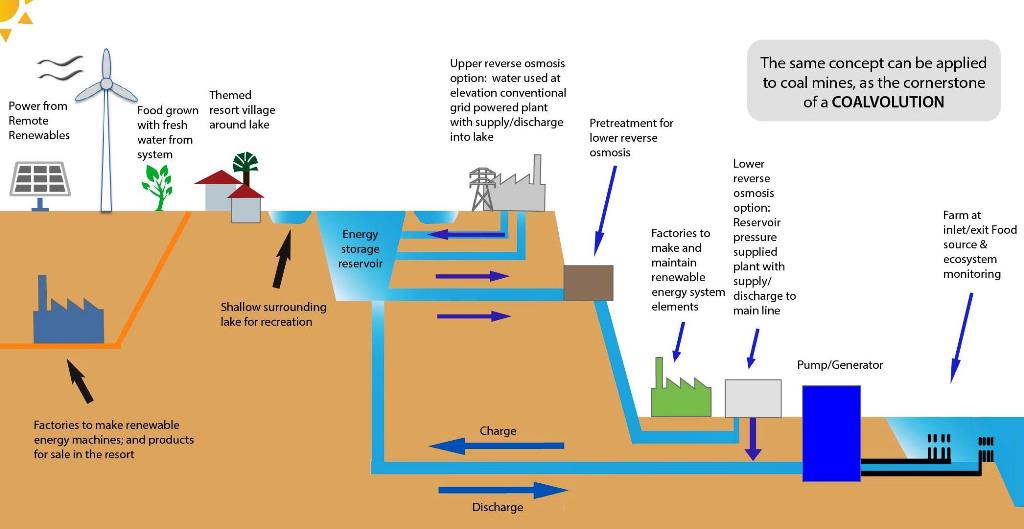 Several places in the Americas have the natural features that would be needed for an integrated power-and-water system to operate. “Any coastal region that has a mountain nearby could be a site,” said Enrique Shadah, who works at MIT’s Abdul Latif Jameel World Education Lab and has been helping Slocum connect with people outside the university to raise awareness about the concept.

Theoretically, the mountain or high cliff would not need to be right next to the ocean—the conduit to take water from the sea to the mountaintop could be longer—but “the more distance between the reservoir and the shore, the higher the cost,” Shadah said in an interview.

The places Slocum and his colleagues have identified as promising include, in no particular order, northern Chile; areas near Los Angeles, California; Baja California, Mexico; the islands of Lanai and Maui in Hawaii; Lima, Peru; the island of Hispaniola and other mountainous Caribbean islands; and areas near Rio de Janeiro, Brazil.

Slocum mentioned one project in the works near Iquique, Chile, where a company called Valhalla is seeking funding for a pumped hydro project called Espejo de Tarapacá. An online video produced by the company shows ideal conditions for such a plant, with a high cliff right next to the Pacific Ocean and the intense solar radiation of the Atacama Desert.

“Our research shows that Chile has the best conditions in the Americas for seawater pumped storage,” Valhalla CEO Juan Andrés Camus said in an email message, adding that the company is researching the possibility of installing a desalination plant at the upper reservoir.

Meanwhile, Slocum said, a California-based company called Oceanus Power & Water, LLC has been working on getting an integrated system built—a similar concept as Slocum is describing, developed independently of his work—in northwest Mexico.

In a phone interview, Oceanus CEO Neal Aronson said the company has selected a site in the state of Sonora, on the Sea of Cortés (also known as the Gulf of California), and it’s about to begin a detailed feasibility study, which will be followed by a permitting process.

Although he declined to discuss specifics, Aronson said the planned facility would be able to store more than 200 megawatts of energy and produce more than 50 million gallons of fresh water per day. This is a logical solution for a place like Sonora, which has plenty of solar power, a growing population, and an inadequate water supply that inhibits future economic growth, he said. “For Mexico, it’s largely an economic development issue.”

This type of system solves the problem of storing energy in a much more environmentally friendly way than batteries, Aronson said, and it uses proven technology. Plus, locating the power storage and desalination systems in the same place and integrating them generates significant savings in capital expenditures and operating expenses.

can be scaled up for areas with large urban populations or scaled down to meet the needs of small island countries. The system can be designed differently depending on whether the greater need is for fresh water or energy storage.

As logical as all this may be, it costs money—potentially a lot of money—and conservative investors typically don’t want to be the first ones through the door. “The challenge is, nobody’s done this before,” Aronson said.

But he believes that the idea has huge potential. “Wherever you have a large coastal population in a semi-arid part of the world, this is a viable, large-scale solution,” he said.

For his part, Slocum is reluctant to talk about the potential cost of an IPHROS project, stressing, “I’m an engineer. I don’t do financing.” But, he said, the smallest project that would be feasible economically would probably be around a 100-megawatt (MW) system, which would serve about 100,000 people with electric power and 500 liters of fresh water per person per day.

An article MIT published last year about the IPHROS idea said the cost would work out to an estimated $5,000 to $10,000 per person served; in other words, a 100 MW system, including the pumped hydro and reverse osmosis facility, as well as the wind and solar power systems, would cost between $500 million and $1 billion.

“Everybody says, ‘Oh, that’s a lot of money.’ But think about it. That gives you 24/7 renewable energy and fresh water forever,” Slocum said.

Driven by the urgency to act in the face of climate change, he has no patience for economic obstacles. “The best long-term investment for you, your children, your grandchildren, is to save the planet. And we can do it without sacrificing our quality of life,” he said.

From a technological standpoint, Slocum said, there’s nothing holding such as project back, since the different pieces have been done before. “We’ve got the technology, we have the economic ability, we have the industrial capability to do this,” he said.

Slocum said that he published the paper in the scientific journal, in 2016, to spread these ideas more widely and generate as much interest as possible. (The paper can be downloaded for free at this link.) He’s not interested in working directly with any company or obtaining a financial stake in any project. “I’m happy for people to start companies and make money on that. Great. God bless them. We all benefit by helping to save the planet,” he said.