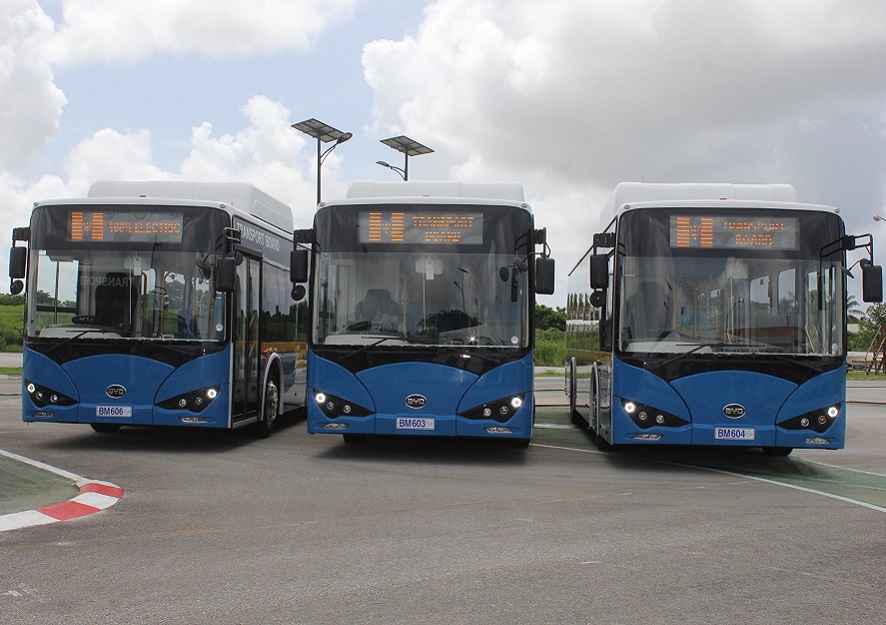 With 33 brand-new electric buses now crisscrossing the island, Barbados is moving full speed ahead in modernizing its public transit fleet and reducing its greenhouse gas emissions. Passengers love the fringe benefits—for starters, the buses are air conditioned—but they are still getting used to one big change: the absence of noise.

​“One of the first complaints I received was that it was too quiet,” Lynda Holder, Chief Operations Officer at the Barbados Transit Board, said with a chuckle. She explained that many people who live along a bus route will listen for the sound of a diesel bus going by and gauge how long they have before it comes back in the other direction, to make sure they get to the stop on time. “It’s too quiet now, so you don’t know when it passes you,” she said.

Holder headed a year-long project to study, compare, select, acquire, and deploy the buses. Fossil fuel vehicles were not an option, she said in an interview; after all, the National Energy Policy for Barbados 2019-2030 has set a high bar for clean energy, with targets of 100% renewable energy and carbon neutrality a decade from now.

Electric buses were hardly a new idea. Barbados has been a leader in the Caribbean in the adoption of private electric vehicles—though they still make up a tiny fraction of cars on the road—and the government has had an eye on electric public transit for some time. The Ministry of Energy had been laying some of the groundwork through the Public Sector Smart Energy Program, supported by the Inter-American Development Bank and the European Union.

Last year, the government gave the Transport Board the green light to purchases electric buses, and Holder’s team set about making it happen. To bring in outside expertise and increase transparency in the process, a College of Negotiators was appointed—a select, multidisciplinary group of professionals who could help study proposals, analyze bids, and make recommendations to the Transport Board.

The process resulted in the selection of the Chinese manufacturer BYD; the acronym stands for Build Your Dreams. Holder said that before a final decision was made, the Transport Board, at its own expense, sent representatives to two places where large numbers of BYD buses are already in operation—California and Chile—to see how the vehicles perform in different conditions and better understand some of the issues involved.

In July of this year, 33 new BYD buses rolled off a ship at the Port of Bridgetown. After a few weeks of inspections, licensing, and driver training, the vehicles officially hit the roads in late August.

At a ceremony to mark the event, the Minister of Transport, Works and Water Resources, Ian Gooding-Edghill, stressed that the “fumes-free” buses will contribute to a cleaner environment, cut fuel costs, and help address the country’s “untenable” shortage of public transportation.

He said the government has authorized the Transit Board to spend a total of US$22.5 million to purchase electric buses, ensure the charging infrastructure is in place, and cover other related expenses. The cost for this initial group of buses was about US$10 million, according to Holder.

At just 21 miles in length and up to 14 miles in width, Barbados is a small country, but it has a dense road network. Transport Board buses—there are now about 150—move commuters and schoolchildren alike, and the fleet serves the whole island, in some cases traveling on roads that are “not at 100%,” Holder said.

“The wear and tear on the buses is very, very serious, so we really needed to get some new stock,” she said. (Some routes are still off-limits to the new buses, pending road repairs and tree trimming. The batteries on the BYD buses are on the roof and wouldn’t take well to overhanging branches.)

In the past two years, the Transport Board instituted a Transport Augmentation Program to allow some privately owned buses to work under its guidance and management. It has also been retrofitting some of its aging diesel buses.

But before now, it had not been able to purchase any buses since 2006, and the oldest vehicles in the fleet date back to 1997. “Anything would have been an upgrade,” Holder said, but she added that the new buses come equipped with all sorts of conveniences, including wheelchair accessibility, security cameras, and Wi-Fi.

“It’s a totally new commuter experience,” said Antonio Sealy, a systems engineer at Barbados Light & Power Company. He has been actively involved in discussions about electric buses for the past two years, both at the Ministry of Energy and the Transport Board, as a representative of the local electric utility.

The modern buses will not only make a big impact in terms of carbon reduction and fuel savings, he said, but they reinforce a positive image for electric vehicles. Of course, it would be possible to equip a diesel bus with air conditioning, but right now the only public buses that offer this level of comfort are electric. “It’s good for the image of electrification,” Sealy said.

The Challenges of Charging

Electrifying the transportation sector is a critical part of a transition to cleaner energy, Sealy said, and public transit provides “the biggest bang for your buck,” considering the hours these vehicles spend on the road every day and the miles they cover.

The BYD buses are based at three depots, each of which has its own fast-charging (80 kW) infrastructure. A normal charging time might be three hours, perhaps with a “top-up charge” during the day, Sealy said.

These are early days for the new buses, and everyone involved is still learning how to make the system work at optimum efficiency. One challenge has to do with taking advantage of the best electricity rates available. Although theoretically it is cheapest to charge the buses in the middle of the night, sharp spikes in a customer’s electricity use will drive up a portion of the bill, since the utility factors in maximum demand.

The Transport Board is investing in a system that will eliminate much of the guesswork. Once that’s in place, Sealy explained, the software can be programmed to take all the variables into account; drivers will simply plug in the buses at the depot and let the system figure out when to charge and for how long.

In the future, if a new electricity rate is approved to incentivize electric vehicles—the utility is working to develop a proposed rate design—the system can be reprogrammed to factor that in. And as Barbados increases its power generation from renewables, Sealy said, the charging can be adapted to capitalize on any surpluses in solar energy.

For now, Transport Board drivers are adjusting to the new technology and learning how to fine-tune their driving habits to keep the batteries as fully charged as possible. Frederick Bovell, a veteran bus operator who has been tasked with training his colleagues on the new units, said driving an electric bus requires some mental “rebooting”; for example, the touch of the accelerator is completely different than on a regular vehicle.

“This is the way forward,” Bovell said of the electric buses, “and everybody must be able to transition”—including passengers who have to get used to looking for the bus instead of listening for it, he added.

Of course, the pandemic has required other adjustments, including sanitation protocols and mask requirements. Ridership is still down about 50% from normal levels, due to the economic slowdown and changes in school schedules, according to Holder.

In the long term, though, Bovell is hoping the new buses will lure back some of the many commuters who gave up on public transit and started driving their own cars to work. His message to them: “Jump on board and get back out there with us.”