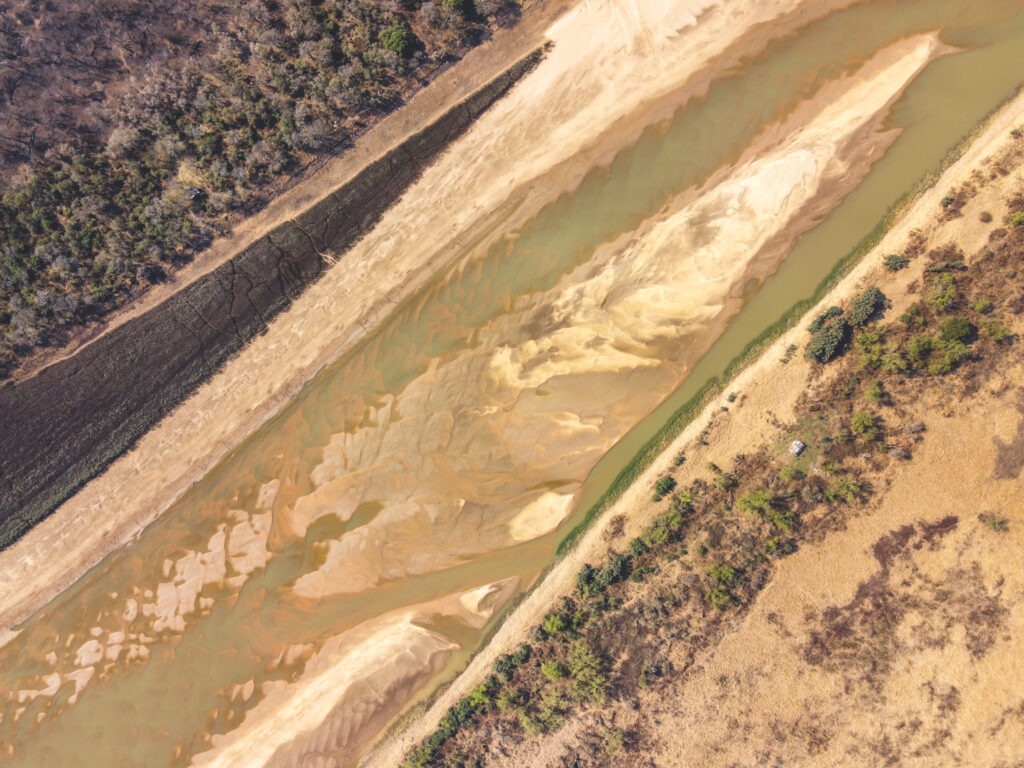 In the Paraná River Basin of South America, particularly in southeastern Brazil, drought has put a strain on power systems that rely heavily on hydroelectric generation. The lights are still on, but reservoirs have reached perilously low levels, energy prices have gone up, and fossil fuel consumption is on the rise.

In September, Brazilian President Jair Bolsonaro asked people to stop using elevators when possible and to take cold showers to save electricity. In a speech in August, Minister of Mines and Energy Bento Alburquerque said the volume of hydropower losses from drought was equivalent to five months of energy use in Rio de Janeiro. He announced that federal agencies had been directed to cut electricity consumption by 20%.

Now, as Brazil and its neighbors enter their summer months, which typically bring rain, the question is whether enough precipitation will fall this season to restore the water levels in the reservoirs back to normal, or whether dry conditions will continue next year.

Drought is not unheard of in this part of the world, which periodically feels major impacts from the recurring, irregular climate pattern known as El Niño and La Niña. A typical La Niña cycle comes with below-normal rainfall in the Paraná Basin, but this year and last, this region has been especially dry.

In a system based on large-scale hydroelectric power, too much depends on rain—and when rain isn’t predictable, neither is the energy market, according to Frederico Boschin, who runs a consulting company in Porto Alegre, Brazil, called Noale Energia.

The assumption has long been that Brazil will get plenty of rain and can store plenty of water in its extensive system of reservoirs, he said, but repeated years of drought have introduced new uncertainty. The situation is “not catastrophic,” he said, but it is cause for concern.

“Our electric market is based on premises that need to be reviewed completely,” Boschin said in an interview. 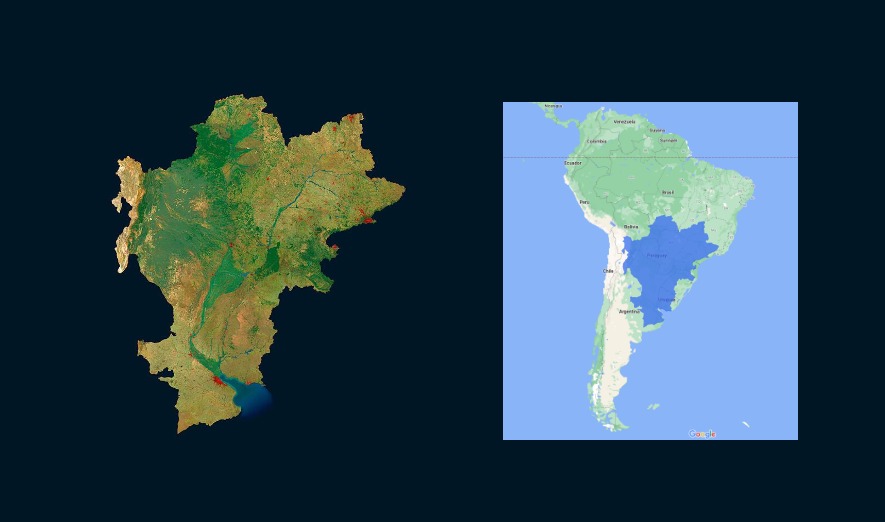 While drought has affected large expanses of South America this year—with severe consequences for agriculture, shipping, and other sectors—the impacts on electricity generation have been especially dire in the Paraná River Basin.

The mighty Paraná is the continent’s second-largest river, after the Amazon, and among the world’s top 10 rivers in volume of water flow. From its source in eastern Brazil, it flows in a generally southwesterly direction through some of the country’s most populous states, and continues into Paraguay and Argentina before emptying into the Atlantic Ocean.

Brazil has more than 50 large dams and reservoirs throughout the Paraná River Basin, which together have the capacity to produce a huge volume of electricity and store a massive amount of water. This year, though, the water in storage dropped to an unprecedented low of 17% as the overall average in the basin, according to Juan Carlos Bertoni, who heads Argentina’s National Water Institute. Although that average has now gone up slightly, to about 22%, there’s still a long way to go before the system is replenished, he said. 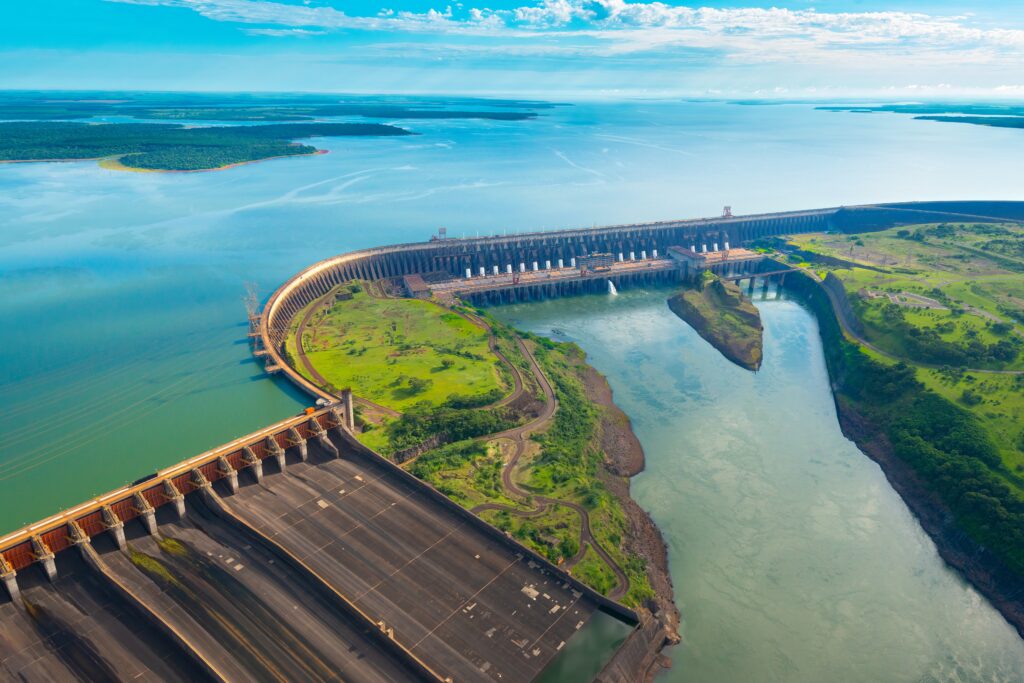 Aerial view of the Itaipu hydroelectric dam on the Paraná River.

Technical experts on water and energy from Argentina and Brazil have been meeting regularly through their respective foreign ministries to keep close track of the situation. Although the teams from the two countries have not discussed a specific percentage they would like to see in the reservoirs, Bertoni said in an interview, he believes it needs to be around double what it is now.

Reservoir levels are a closely watched indicator in Brazil. The National Electric System Operator (ONS) posts daily updates for each of the four regions that make up the country’s electric system. ONS releases daily weather forecasts, which are considered a reliable source of information, but the question of whether or not a particular region will see rain is so important that energy trading companies in Brazil also keep meteorologists on staff, according to Frederico Boschin.

The lack of rain throughout most of this year has led Brazil to increase its use of thermal power, which costs more to produce than hydroelectricity. Thermal plants that are meant to operate only in peak periods have been running flat out to meet the energy demand, and this has resulted in fuel surcharges added to customers’ electric bills, Boschin said.

In addition, he said, the energy spot market has been “crazy,” sometimes fluctuating wildly from one week to the next depending on whether it’s raining or not. That kind of volatility makes it hard for the market to determine the cost of energy, Boschin said, which makes energy suppliers reluctant to offer long-term contracts. For large industrial customers that purchase energy directly from generation companies, that complicates planning and makes it hard to raise investment capital. 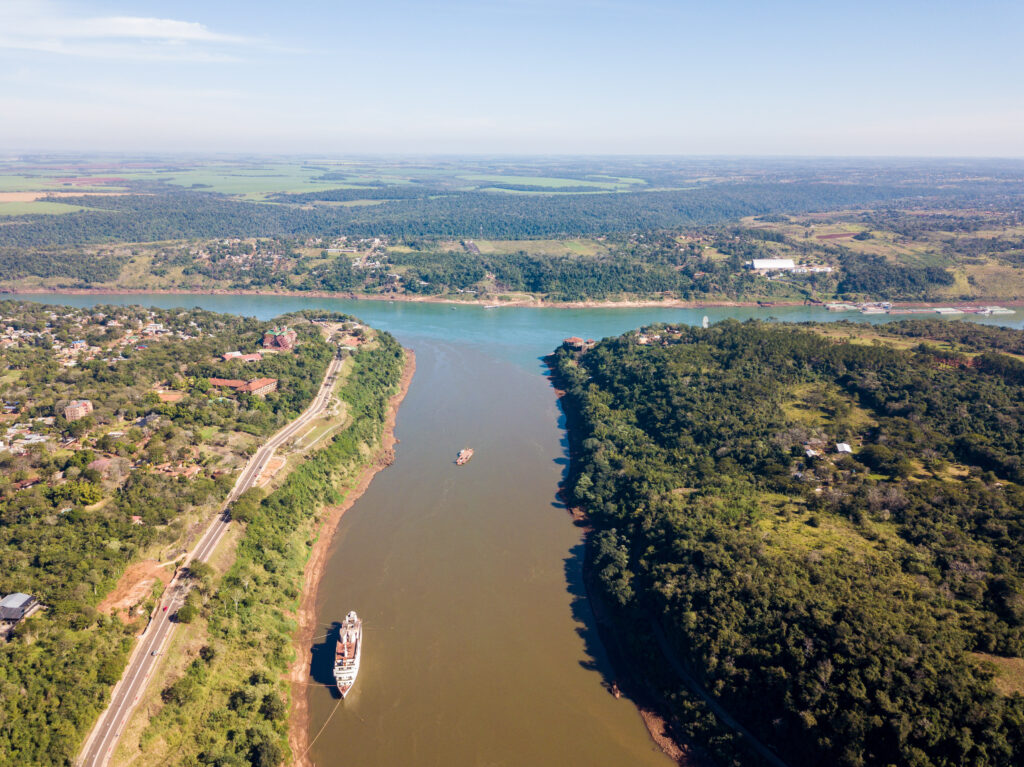 The drought has had less of an impact on the electricity sector in Paraguay and Argentina than in Brazil. Although Paraguay depends entirely on hydropower, it produces far more than it needs and has not come close to having any shortages, several energy experts said. Other sectors of the Paraguayan economy have been hit hard, though, especially since the Paraguay River—which flows through the middle of the country and connects with the Paraná at Corrientes, Argentina—has also experienced severe drought this year.

In Argentina, hydropower has become a less significant part of the national energy mix than it used to be, not because of drought but because of a lack of investment in new plants, according to Gerardo Rabinovich, who heads an Argentine energy company called Empresa Mendocina de Energía (EMESA).

The country relies more on natural gas for electricity than on hydro, and in recent years it has added wind and solar energy into the mix. Those factors, combined with lower demand due to the current economic recession, mean that Argentina has been able to absorb the loss of about half its electricity generation from Yacyretá for much of the year, Rabinovich said in an interview.

In fact, he said, Argentina has seen an economic benefit from the situation because it has been able to export energy to Brazil in recent months—mostly natural gas but also some gasoil and fuel oil. “For now, that has been an important source of revenue for Argentina,” he said.

As far as Rabinovich is concerned, the more that countries rely on hydroelectric power and other renewables, the better. But he would like to see more interconnections between the different electric systems within the Southern Cone, including a robust interconnection between Yacyretá and Itaipú, so that the countries can help each other fill in gaps when needed.

“A system with a greater density of interconnection, with more regional electricity integration, could better address these problems,” he said.

Uruguay, like Argentina, has been exporting energy lately to it colossal neighbor to the north. Rafael Terra, whose work at the University of the Republic focuses on the interface between climate and energy, as well as climate and agriculture, said the country’s power plants that run on fossil fuels have cranked up production this year to sell more electricity to Brazil. 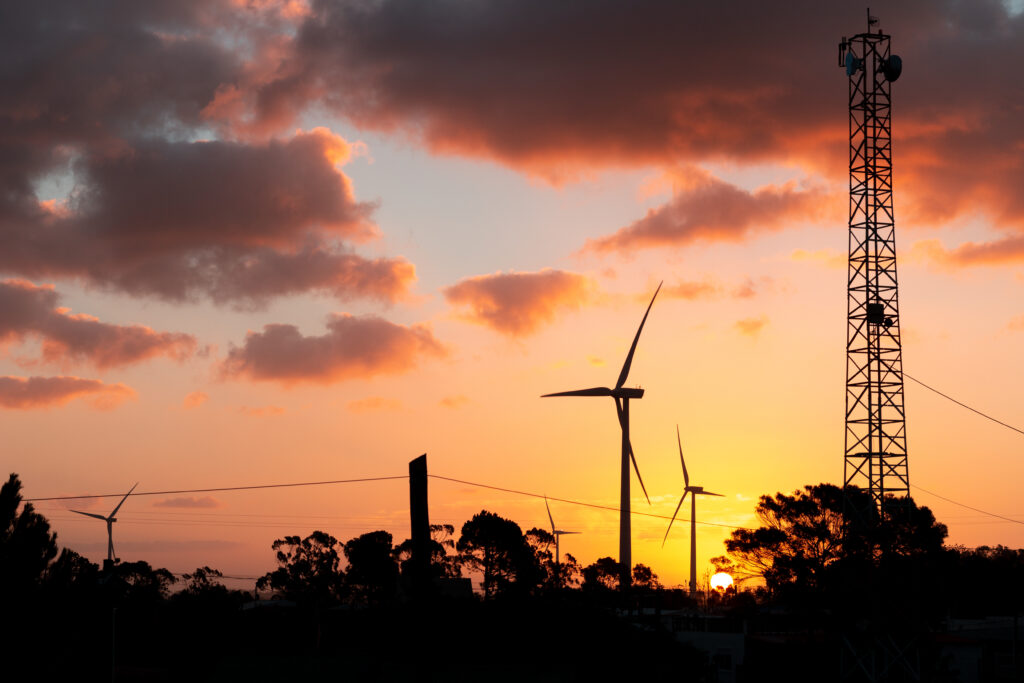 Wind farms on the Brazil-Uruguay border.

In recent years, Uruguay has moved away almost entirely from fossil fuels, using its thermal plants only as back-up. Fossil fuels normally now account for an average of about 5% of annual electricity production, Terra said; this year, though, the number is close to 20%, even though Uruguay has generated more electricity from renewables than it consumes domestically. The excess power in the system is being sold to Brazil, which has been willing to pay high prices at weekly auctions, according to Terra.

Uruguay, which has hydroelectric dams on the Uruguay River and the Río Negro, has had both wet and dry periods in recent months, but not the kind of deep, prolonged drought as seen in the Paraná River Basin.

It has had such droughts in the past, though. Terra said the main factor, though not the only one, is the effects of La Niña, which is part of the climate pattern in the tropical Pacific Ocean that scientists call the El Niño Southern Oscillation (ENSO). The scientific community has not yet reached a consensus about whether there is a connection between the ENSO effect and climate change, according to Terra.
Regardless of what drives these patterns, he said, it was important for the country to be better prepared to withstand periodic drought. Two decades ago, Uruguay was completely dependent on hydropower, which meant that if water levels fell, it had to fill in any gaps with imported fossil fuels, at a cost that sometimes reached as high as 5% of GDP.

Diversifying into non-hydro renewables, particularly wind power, was a way to address three key issues, Terra said: environmental goals, economic concerns, and national energy autonomy. “It’s not that we’re better than anyone else, but all the incentives were aligned,” he said.

Today, leaving aside the current spike in fossil fuel generation, wind power and hydroelectric power each account for about 40% of Uruguay’s electricity production, followed by biomass at 10%, and solar and fossil fuels at about 5% each.

Even though Brazil is a far larger country with different geographic characteristics and a very different electric system, Terra believes its federal government and state governments could take some lessons from Uruguay in how to become more resilient. “The more diversity you have, the more tools you have to fill the holes,” he said. 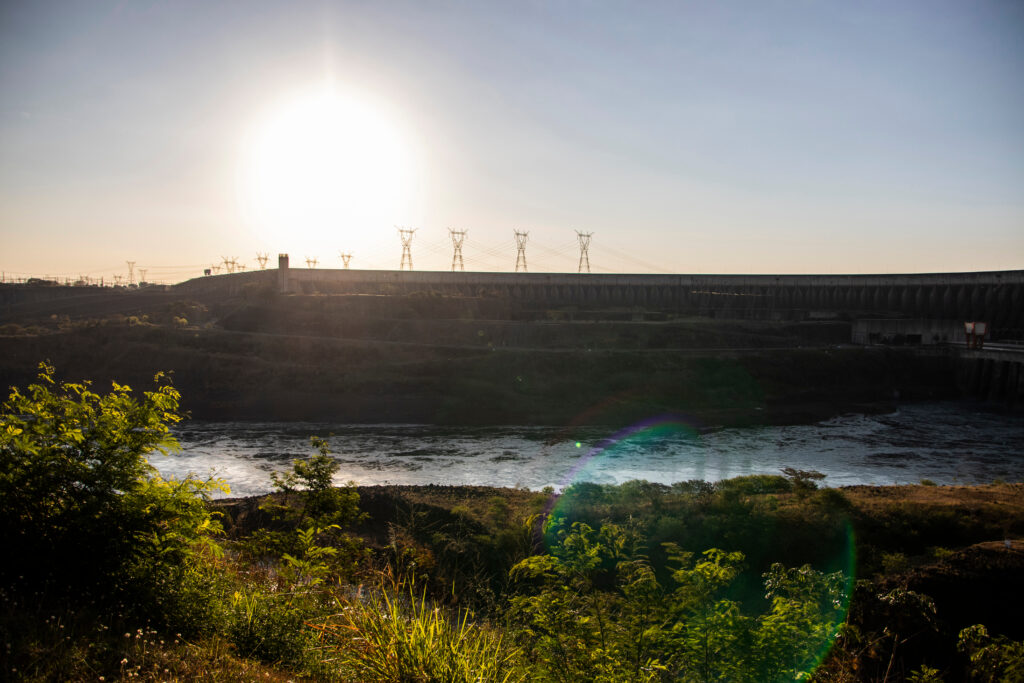 One was widespread deforestation; another was an increase in annual precipitation during a period of more than three decades; and the third was the construction of an extensive system of dams up and down the Paraná River and its tributaries.

Many people might assume that all those dams have caused the current drop in water flows in the rivers—but in fact the opposite is true, said Bertoni, who also teaches hydrology and hydraulic processes at the National University of Córdoba.

The reservoirs that store water to generate electricity function somewhat like cisterns on buildings, he said; they ensure that a certain amount of water is available on tap even if the supply temporarily drops off. When the river gets too low, more water can be released from the reservoir to keep the turbines operating. That keeps the flow of the river at a steadier level.

Historically, before the dams were built, water levels in the rivers in the Paraná Basin tended to have wider year-to-year fluctuations. The year with the lowest levels on record was 1944.

No matter how much reservoir capacity is available, though, it won’t be enough if it stops raining for too long. That’s what has been happening in the past two years, Bertoni said.

In recent months, Brazil has released significant amounts of water into the rivers, which has kept the water flows from reaching 1944 levels but left relatively little water in the reservoirs. To Bertoni, it seems like a gamble: keep the lights on now and hope for rain in the summer. It’s a bit like Russian roulette, he said, and “so far, they’ve dodged the bullet.”