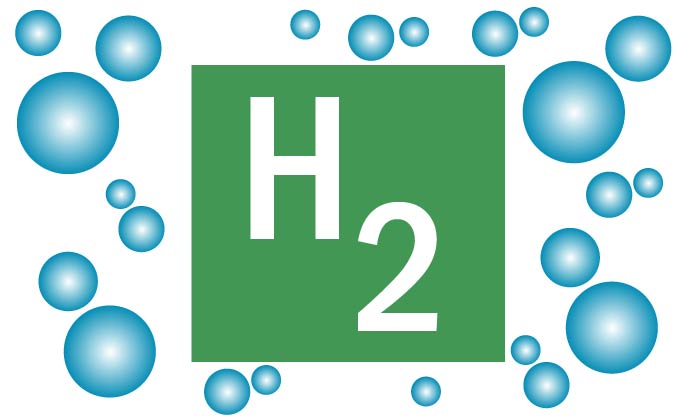 As countries around the world scramble to lower their carbon emissions, many are looking to green hydrogen—in other words, hydrogen produced using renewable energy—to help them meet their goals. One country that believes it is especially well positioned to be a major player in that market is Chile. Energy Minister Juan Carlos Jobet has encouraged the country to “think big” about Chile’s prospects as a producer and exporter of green hydrogen.

“Every day I am more convinced that this is an extraordinarily positive opportunity for Chile,” Jobet said during a webinar in June—the first of several virtual meetings held in recent weeks as part of a broad government effort to forge a National Green Hydrogen Strategy. 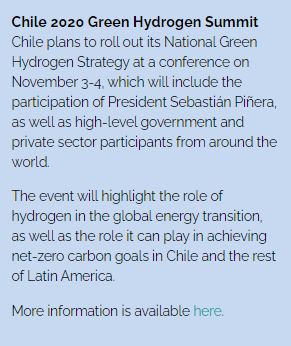 Green hydrogen has the potential to yield enormous environmental, social, and economic benefits, Jobet explained. On the environmental front, it could give Chile a boost toward its goal of becoming carbon-neutral by 2050, he said, adding that green hydrogen could account for about a quarter of the total reduction in carbon emissions the country will need.

A green hydrogen industry will also help Chile diversify its economy, create jobs, attract investment, and open up new opportunities for individuals, cities, and regions through the establishment of “development hubs or ecosystems” centered around this technology, Jobet said.

One reason green hydrogen makes sense for Chile, he said, is the country’s abundant renewable energy potential—estimated at more than 70 times what it needs for domestic electricity consumption. “We have to find ways to harness that renewable energy and export it to the world,” he said.

Chile is moving at a “dizzying” pace to lay the foundations for this new industry, according to Max Correa, who heads a division in the Energy Ministry in charge of fuels not used to produce electricity—including green hydrogen. The country’s experience with solar photovoltaic (PV) energy shows the kind of progress that can be made in a short time, he said in a recent interview. In 2013, the country’s annual production of solar PV energy totaled 7 gigawatt hours (GWh); in 2020, it will come to nearly 1,000 times that amount.

“We think that something similar will happen with green hydrogen,” Correa said. And this is not some far-off dream, he added. “This is now. In this decade, there will be large-scale projects developed for domestic use but also for export.”

On a global level, this is a time of “unprecedented momentum” for hydrogen, as the International Energy Agency (IEA) put it a report last year called The Future of Hydrogen. Although previous “waves of enthusiasm” for hydrogen’s potential have come and gone, the report said, this time around, hydrogen could be on a path to fulfill “its longstanding potential as a clean energy solution.”

Today, hydrogen is used mainly in industry, with oil refining and the production of ammonia for fertilizer the top two applications, followed by the production of methanol and steel. The hydrogen used in these industrial processes is extracted “almost entirely” from fossil fuels—primarily natural gas and coal—and its production “is responsible for annual CO2 emissions equivalent to those of Indonesia and the United Kingdom combined,” the IEA report said. “Harnessing this existing scale on the way to a clean energy future requires both the capture of CO2 from hydrogen production from fossil fuels and greater supplies of hydrogen from clean electricity,” it added. 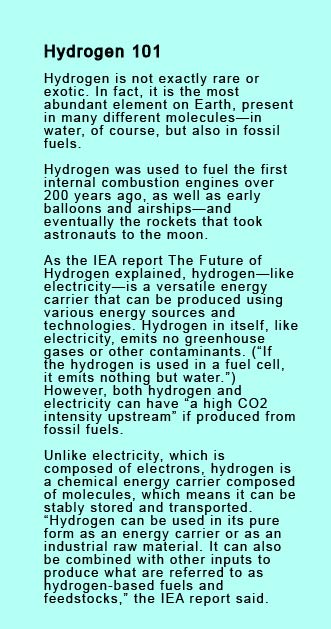 Although there is no standardized nomenclature for hydrogen, these days it is often assigned a color depending on how it is produced. “Black” hydrogen comes from coal, “gray” from natural gas, and “brown” from lignite; “blue” refers to fossil fuel-based hydrogen in which CO2 emissions are reduced by carbon capture, use, and storage. (As Greentech Media put it in one story, “For a colorless gas, hydrogen gets described in very colorful terms.”)

What Chile is placing its bets on is green hydrogen—also known as renewable, clean, or electrolytic hydrogen—produced through electrolysis, a process that uses electric current to split H2O into its two components, hydrogen and oxygen. When the electricity comes from renewable sources, such as solar PV or wind energy, the hydrogen that is extracted is clean.

Producing hydrogen from renewable energy is still relatively costly, but the IEA projects that the cost could fall by 30% in a decade, due to declining costs of renewables and the expected benefit of manufacturing equipment such as electrolyzers on a larger scale.

New hydrogen projects have been cropping up around the world in recent months, though most of them are not on the green end of the spectrum. Depending on their energy mix, many countries that are aiming to produce green hydrogen someday will start out using fuels such as natural gas or even coal, according to Correa.

The largest green hydrogen project so far, announced in July, is a $5 billion undertaking to be built in Saudi Arabia, powered by 4 gigawatts of wind and solar power. Air Products, a U.S. gas and chemical company, is partnering on the project with the Saudi electric utility and desalination company ACWA Power and the planned city of Neom.

With Chile’s wealth of renewable resources—a Washington Post piece in 2017 referred to the country as “a solar Saudi Arabia”—it will be able to produce hydrogen that is “100% green,” Correa said. The Atacama Desert has the highest levels of solar radiation on the planet, while the southern part of the country has major wind potential, he said. Another asset is Chile’s strong port infrastructure.

Those advantages, along with the ever-lower costs of producing renewables, will give the country an edge, Correa said—despite its distance from potential end-user markets, mainly in Asia. The consulting firm McKinsey & Co. has determined that by 2030, green hydrogen in Chile could become competitive with gray hydrogen made from natural gas, according to a presentation the company made during the webinar in June.

Hydrogen can be transported in different ways, including through a process much like liquefied natural gas, in which the hydrogen is converted into a liquid for transport and then back into a gas at its destination. It can also be combined with other elements into compounds that are easier to handle, ship, and store.

Because of hydrogen’s nature as a “building block,” Chile will be in the business not just of green hydrogen but “green molecules” with a range of uses that can help cut emissions in sectors that have proved hard to decarbonize, Correa said.

One example: hydrogen combined with nitrogen makes ammonia, a feedstock for manufacturing fertilizers. When green hydrogen is used, it eliminates the ammonia’s greenhouse gas emissions. That could have a huge impact, since ammonia is already one of the most commonly used chemicals in the world. The shipping industry, which has ambitious targets to lower emissions, plans to use green ammonia as its fuel of choice, Correa noted. (The newly announced project in Saudi Arabia will produce green ammonia for export to global markets.)

Meanwhile, Chile has the potential to reduce its own carbon footprint by using green hydrogen in the mining industry. While the industry has made strides in terms of using clean electricity, it still has a long way to go when it comes to the direct use of fossil fuels, Correa said. For example, he added, each of the giant trucks used in mining can burn up to 3,000 liters of diesel per day. He pointed out that projects in South Africa are starting to use green hydrogen to fuel these mining trucks, adding, “Chile has an obligation to move in that same direction.”

It’s not just about meeting international climate goals, he said, but about responding to markets that are increasingly demanding smaller carbon footprints throughout the whole cycle of production, starting with raw materials. There is added value in “green copper.”

In the past few months, the Energy Ministry has spearheaded a process to design a long-term strategy for green hydrogen. It has held a series of technical roundtables with experts, companies, professional associations, and other players, and has been consulting with civil society organizations to discuss how to extend the benefits of this potential new industry as broadly as possible.

The Energy Ministry is working closely with other government agencies to ensure that it is laying a strong foundation for the future. International consultants such as McKinsey & Co. are providing input, and the Inter-American Development Bank (IDB) is working on a study to analyze the export market in detail.

The process of putting together a strategy includes identifying barriers and gaps that could keep green hydrogen from taking off, Correa said. The country is not in a position where it can invest massive amounts of public resources in green hydrogen, he explained, but it can provide targeted incentives and gradually eliminate some of the “hidden subsidies” and distortions that tip the scales toward fossil fuels.

The right kind of regulatory structure is also important, he said, noting that laws enacted in 2008 and 2013 helped spur investment in the solar and wind industries that are so important to Chile today.

The goal is to create a regulatory and policy structure that comes from the state and not any one administration, Correa said. An advisory council involved in the process includes representatives from across the political spectrum, to ensure that the policies that are developed will last over time.

Energy Minister Jobet also stressed that long-term perspective in his remarks during the webinar in June. “The efforts required for us to be successful in green hydrogen have to go far beyond the duration of this government,” he said.

And, he said, the green hydrogen initiative will require everyone’s combined efforts—not just government, but business, academia, and civil society too. “The government and the state can facilitate—it has a central role—but this is something we will all do together,” Jobet said. “If not, we won’t be able to do it.”